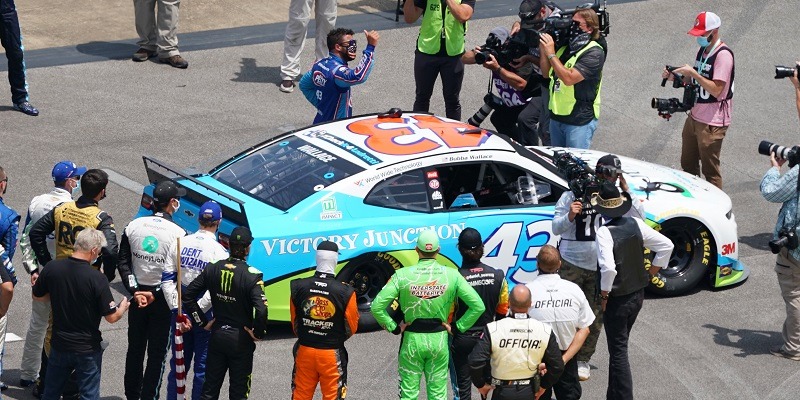 Bubba Wallace expressed relief that the noose found in his garage last weekend wasn’t intended for him, but he defended the investigations by NASCAR and the FBI into the incident.

The FBI announced Tuesday that photographic evidence showed that the noose was present at the Talladega (Ala.) Superspeedway garage as far back as last fall, proving that it wasn’t placed specifically for Wallace to see it.

However, Wallace, the only Black driver who currently competes in NASCAR’s top-level Cup Series, said Wednesday that the decision to look into the noose’s presence was warranted.

Speaking on ESPN’s “First Take,” Wallace said, “Yes, it was a garage pull for our stall at Talladega, but that was in the solid shape of a noose. And when my guys seen that, when my crew member had seen that — who happened to be African American — he did his research first, and I was very proud of that.

“David Cropps — a guy I’ll stand by in any trenches, any day — walked up and down the garages to make sure he wasn’t overreacting. And when he seen that the other garage pulls were basically just a solid piece of rope, no knots in them, and we had a knot that was in the shape of a noose — yeah, that calls (for an investigation).”

Regarding the noose’s origin, Wallace said, “Whoever tied it knows how to tie a noose. And that’s fine. I don’t know if they did it with hate in their heart or what as a joke, but it ended up being a misunderstanding, some will say. But unfortunately, I hate that I’m kinda on the bad end of the deal because of it, just because I was simply given information related to me and we went on with it.”

The fact that the investigation found the noose wasn’t new led to social-media criticism of Wallace.

He said Tuesday night in an interview with CNN’s Don Lemon, “I’m mad because people are trying to test my character and the person that I am and my integrity.”

Wallace added, “It was a noose. Whether tied in 2019 or whatever, it was a noose. So, it wasn’t directed at me but somebody tied a noose. That’s what I’m saying.”

In recent weeks, Wallace led the movement that prompted NASCAR to ban the Confederate flag from its facilities. After news of the noose spread, all NASCAR drivers and their crew symbolically pushed Wallace’s car to the front of the grid on Monday at Talladega, then stood behind him in a show of solidarity.

Wallace tweeted Wednesday, “It’s been an emotional few days. First off, I want to say how relieved I am that the investigation revealed that this wasn’t what we feared it was. I want to thank my team, NASCAR and the FBI for acting swiftly and treating this as a real threat.

“I think we’ll gladly take a little embarrassment over what the alternatives could have been,” Wallace continued. “Make no mistake, though some will try, this should not detract from the show of unity we had on Monday, and the progress we’ve made as a sport to be a more welcoming environment for all.”