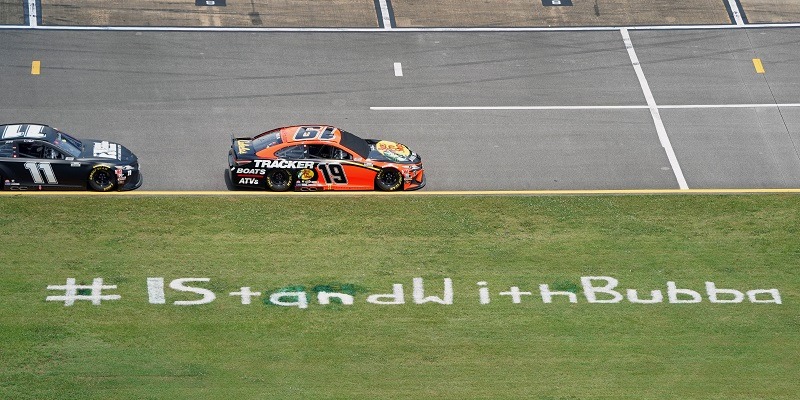 The FBI has joined the investigation after a noose was found in the garage stall of Bubba Wallace’s No. 43 team on Sunday.

The discovery capped a day in which a Confederate flag flew over Talladega Superspeedway in Alabama and many others lined the streets leading into the track in defiance of NASCAR’s banning of the Confederate flag at all of its tracks and events.

NASCAR launched an immediate investigation into who put the noose in Wallace’s stall. Wallace is the only black driver on NASCAR’s premier Cup Series and the leading voice behind the sport’s push for racial equality and the banning of the Confederate flag.

“Late this afternoon, NASCAR was made aware that a noose was found in the garage stall of the 43 team,” the entity said in a statement. “We are angry and outraged, and cannot state strongly enough how seriously we take this heinous act. We have launched an immediate investigation, and will do everything we can to identify the person(s) responsible and eliminate them from the sport. As we have stated unequivocally, there is no place for racism in NASCAR, and this act only strengthens our resolve to make the sport open and welcoming to all.”

Shortly after NASCAR made the announcement, Wallace responded:

“Today’s despicable act of racism and hatred leaves me incredibly saddened and serves as a painful reminder of how much further we have to go as a society and how persistent we must be in the fight against racism. Over the last several weeks, I have been overwhelmed by the support from people across the NASCAR industry including other drivers and team members in the garage. Together, our spirt has made a commitment to driving real change and championing a community that is accepting and welcoming of everyone. Nothing is more important and we will not be deterred by the reprehensible actions of those who seek to spread hate. As my mother told me today, ‘They are just trying to scare you.’ This will not break me, I will not give in, nor will I back down. I will continue to proudly stand for what I believe in.”

NASCAR president Steve Phelps told The Athletic’s Jeff Gluck that FBI officials were notified and were on site by Monday morning.

“We don’t have a lot of answers at this moment,” Phelps said. “Early stages of this.”

Phelps, who personally notified Wallace about the discovery of the noose, said whoever is responsible will be “unequivocally banned from NASCAR for life.”

Team owner Richard Petty said Monday that he was “enraged” by the incident and vowed to stand “shoulder to shoulder” with Wallace.

“I’m enraged by the act of someone placing a noose in the garage stall of my race team. There is absolutely no place in our sport or our society for racism. This filthy act serves as a reminder of how far we still have to go to eradicate racial prejudice and it galvanizes my resolve to use the resources of Richard Petty Motorsports to create change,” Petty said in a statement. “The sick person who perpetrated this act must be found, exposed, and swiftly and immediately expelled from NASCAR. I believe in my heart this despicable act is not representative of the competitors I see each day in the NASCAR garage area. I stand shoulder to shoulder with Bubba, yesterday, today, tomorrow and every day forward.”

Prior to Sunday’s scheduled GEICO 500, a small plane flew above the track with a banner of the Confederate flag and carrying a second banner that said “DEFUND NASCAR.”

There were vehicles outside the grounds displaying the Confederate flag. One social-media post displayed a video showing a stream of cars and trucks driving down Speedway Boulevard, with the flags waving.

People along the road were also waving the flag or cheering on the caravan. The race was later pushed back to Monday because of inclement weather.

NASCAR executive vice president Steve O’Donnell wasn’t impressed by the sight of a plane displaying the Confederate flag and showed a picture of black and white hands clasped together on his Twitter feed Sunday.

“You won’t see a photo of a jackass flying a flag over the track here…but you will see this…Hope EVERYONE enjoys the race today.”

You won’t see a photo of a jackass flying a flag over the track here…but you will see this…Hope EVERYONE enjoys the race today. pic.twitter.com/ppwP1ggNjt

Also, the logos on Denny Hamlin’s car were changed to display the National Civil Rights Museum.

Sponsor FedEx donated $500,000 in support of the museum’s mission to chronicle the history of civil rights in the United States. The museum and FedEx headquarters are both located in Memphis, Tenn., and Hamlin visited the museum on Thursday.

The race is scheduled to be run Monday at 3 p.m. ET.