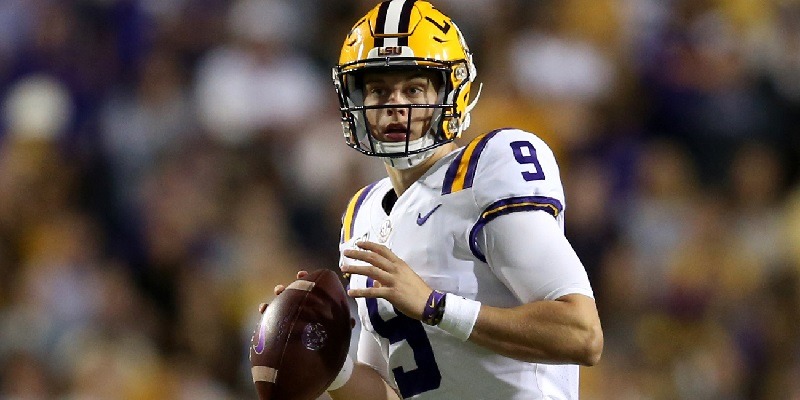 Alabama quarterback Tua Tagovailoa had ascended to the top spot in recent weeks, but he is recovering from surgery for a high right ankle sprain suffered during Saturday’s win over Tennessee.

Coach Nick Saban said Monday that there is “no real timetable” for the junior’s return, although the top-ranked Crimson Tide are hoping it is for the Nov. 9 home game against second-ranked LSU.

Tagovailoa will miss this week’s home game against Arkansas before the team has a bye week.

Burrow, who began the season with +3000 odds on FanDuel Sportsbook, is +120 this week, according to Las Vegas Westgate SuperBook. Oklahoma’s Jalen Hurts is next at +140. Both players were +300 last week at Westgate.

Tagovailoa slid from minus-140 to +350 on concerns over his injury and the possibility of him missing a potential “Heisman moment” game against LSU.

Burrow and the LSU offense have been one of the key stories of the college football season, with Burrow second nationally with 354.9 passing yards per game and in passing efficiency (216.2 rating). His 29 touchdown passes are tied for first in the country, helping a revived Tigers attack average 50.1 points per game.

Hurts leads in passing efficiency (226.1) and is second in total offense (397.0 yards per game) for fifth-ranked Oklahoma, tops in the nation with 50.4 points per game.

The ever-efficient Tagovailoa has thrown 27 touchdown passes with only two interceptions.

Ohio State quarterback Justin Fields, whose team is ranked third and undefeated, saw his odds shorten this week from +1400 to +1000 at Westgate.

There is a new candidate on the fringes of the race, as Oregon quarterback Justin Herbert is down to +4000 a week after being listed at +8000. The one-loss Ducks, ranked 11th, are coming off a big Pac-12 win at Washington and remain within the realm of possibility of reaching the College Football Playoff.

Wisconsin running back Johnathan Taylor also is at +4000 but fading after the Badgers were upset by Illinois on Saturday. Taylor was +2000 last week.