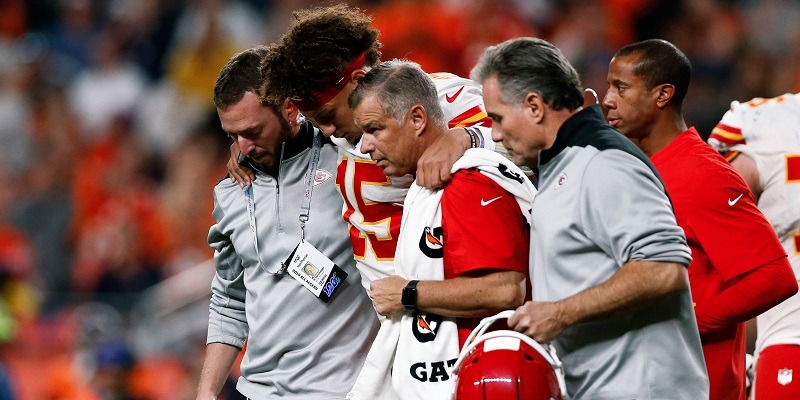 An MRI exam confirmed Kansas City Chiefs quarterback Patrick Mahomes dislocated his right kneecap in Thursday night’s game against the Denver Broncos, but he sustained no other significant damage, according to multiple reports on Friday.

ESPN’s Adam Schefter, citing league sources, tweeted that the MRI result was a “best-case scenario.” That means a limited absence for the reigning league Most Valuable Player of “about three games,” Schefter reported.

With his team up 13-6 and facing a fourth-and-1 at the Denver 5-yard line with 10 minutes left in the second quarter, Mahomes ran a sneak to convert the first down.

The 24-year-old quarterback entered the game playing on a tender left ankle he sprained in the season opener and aggravated several times, including Sunday in a home loss to the Houston Texans.

The Chiefs defeated the Broncos 30-6 on Thursday to move to 5-2 and retain their lead in the AFC West.

Mahomes began the night leading the NFL with 2,104 passing yards. He was 10-of-11 passing for 76 yards and a touchdown before exiting versus Denver.

After the injury, the Chiefs turned to veteran backup Matt Moore, who completed 10 of 19 pass attempts for 117 yards and a touchdown.

In 10-plus NFL seasons with the Carolina Panthers, Miami Dolphins and Chiefs, Moore, 35, has completed 59.4 percent of his passes for 7,055 yards with 46 touchdowns and 36 interceptions.

Another veteran backup, 34-year-old Chad Henne remains on injured reserve as he recovers from surgery after breaking an ankle in the preseason. The Chiefs signed Moore, who sat out the 2018 season, after Henne’s injury.

Mahomes’ injury made an immediate impact with oddsmakers. The Chiefs went from 8-1 at many sportsbooks to 10-1 by PointsBet and 11-1 by DraftKings.