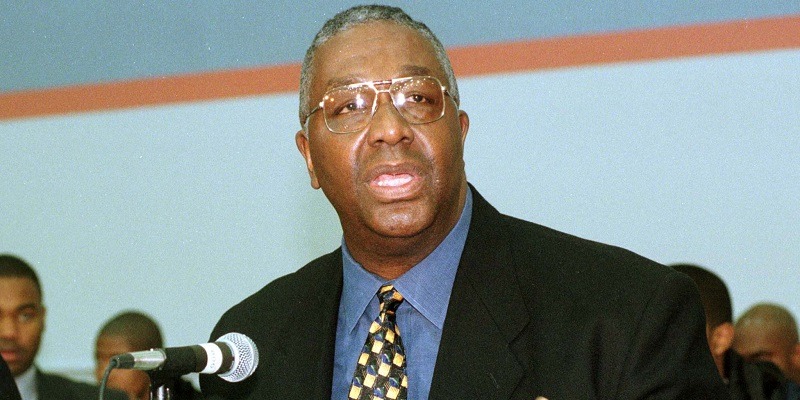 Hall of Fame and longtime Georgetown basketball coach John Thompson died Monday at the age of 78.

The cause of death was not immediately known.

“We are heartbroken to share the news of the passing of our father, John Thompson, Jr. Our father was an inspiration to many and devoted his life to developing young people not simply on, but most importantly, off the basketball court,” the Thompson Family said in a statement Monday. “He is revered as a historic shepherd of the sport, dedicated to the welfare of his community above all else.

“However, for us, his greatest legacy remains as a father, grandfather, uncle, and friend. More than a coach, he was our foundation. More than a legend, he was the voice in our ear everyday,” the statement read in part.

Thompson, who carried the moniker “Big John” to basketball observers and “Big Ace” among his own family, was the first Black coach to win an NCAA basketball championship. He was inducted into the Naismith basketball Hall of Fame in 1999.

John Thompson “was a giant”

Along the way, Thompson was a strong voice for social justice and against racism.

He famously walked off the court prior to a game in 1989 to protest Proposition 48, an NCAA rule that banned academically ineligible freshmen from receiving scholarships. Thompson’s protest was his way of bringing attention to a measure he believed mostly impacted Black players and limited their opportunities.

“He was a giant,” former Big East commissioner Mike Tranghese told Yahoo Sports on Monday. “What he did coaching speaks for itself. As we’ve sat here and watched what’s going on with the NBA and social justice, John did it 30 years ago. But he did it by himself.”

“He was a legendary player and even great person,” Providence tweeted out Monday morning.

The Friar family mourns the loss of John Thompson ‘64. He was a legendary player and an even greater person. Our thoughts and prayers are with the Thompson family.

Thompson was drafted by the Boston Celtics in the third round of the 1964 NBA draft. Thompson played behind Bill Russell in winning two NBA titles with the team in 1965 and ’66. Thompson averaged 3.5 points in 74 games with Boston.

Thompson began his coaching career at St. Anthony Catholic School in Washington, D.C., in 1966. He went 122-28 in six years before taking the Georgetown job in 1972.

Thompson coached the United States basketball team to a bronze medal in the 1988 Olympics, the last time the U.S. sent college players to the Olympics.

He resigned after 13 games in 1998-99 season, citing problems in his marriage.

Ewing, in particular, turned Georgetown into a national power. All three of Georgetown’s Final Four appearance under Thompson came with Ewing manning the paint.

Thompson is survived, in part, by his sons, John Thompson III, who also coached at Georgetown, and Ronny Thompson, and daughter, Tiffany Thompson.