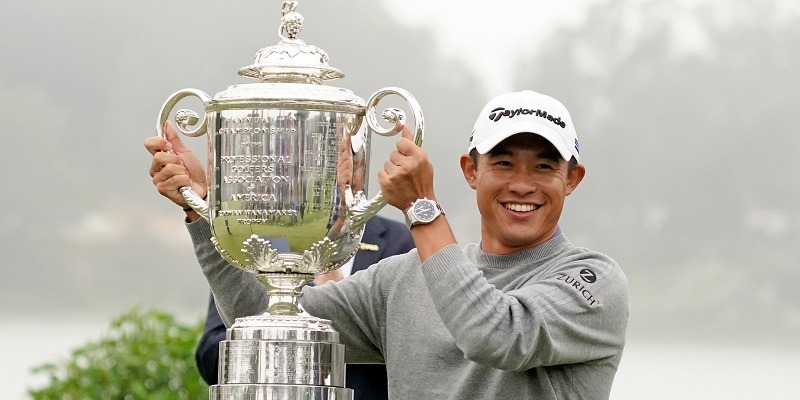 Collin Morikawa drove the green and then sank a 7-foot eagle putt on the par-4 16th to take a two-stroke lead, and then held on down the stretch to win the PGA Championship at Harding Park in San Francisco by two strokes on Sunday.

In shooting a final-round, 6-under 64, Morikawa finished at 13-under 267, two strokes better than England’s Paul Casey and Dustin Johnson, who began the day as the leader. The 64 is the lowest final-round score by a PGA champion in 25 years.

“I knew I had to hit a good one,” Morikawa said about his drive at No. 16 with 278 yards to the front of the green and 294 yards to the hole. “And (I) stepped up, you know, and those are moments I’m always going to remember.”

Morikawa also joined Jack Nicklaus, Tiger Woods and Rory McIlroy in winning the PGA at the age of 23. Only Gene Sarazen (twice) and Tom Creavy won the Wanamaker at a younger age. Morikawa also became the ninth player to win the PGA Championship in his debut appearance at the event.

The first major played without fans in attendance because of the COVID-19 pandemic, this PGA Championship saw two of the most clutch shots, certainly in recent event history, by its champion.

With eight players tied for the lead at 10 under, Morikawa came up short on his second shot but then chipped in from 54 feet for a birdie at the par-4 14th to give him the lead.

With a loaded leaderboard of golf’s biggest names — including Jason Day, Bryson DeChambeau, Tony Finau, Justin Rose and Xander Schauffele – the field stayed close but failed to catch the lead trio. Morikawa put it away with his stunning drive-and-putt eagle two holes after making his chip.

It is the second major for Morikawa, the third title of his career and his second tournament title of the season.

“Yeah, this is the first time I’ve been around a leaderboard that crowded, so many guys out there trying to make birdies, we’re all tied for the lead or whatever it is, one back,” Morikawa said. “Especially in the closing holes out here, they’re not easy.”

“Look, I played phenomenal golf and there’s nothing I would change,” Casey said. “I’m very, very happy with how I played. Great attitude. Stayed very calm and stayed in the present. Wasn’t enough. The glorious shots Collin hit on 16 to make eagle, you have to tip your cap.”

Matthew Wolff (65) was one of five golfers to finish the tournament at 10 under and in a tie for fourth place, joining Day, DeChambeau and Finau (each with a 66) and Scottie Scheffler (68).

“It was bunched and somebody had to pull away, and that was going to be kind of it,” DeChambeau said. “I thought, ‘And that’s what Collin’s doing right now.’ It’s one of those things that I had plenty of opportunities to do that this week and I didn’t do it, for multiple reasons, golf-swing related issues, iron-play issues. Just a couple shots that added up over the course of the week.”

Brooks Koepka, who won the last two PGA Championships, and is a four-time major winner, started the day two shots off the lead but posted a 4-over 74 on Sunday to finish in a tie for 29th place. With his chance at a victory fading, he turned into a cheerleader for Casey, his playing partner.

“I mean, it’s my first bad round in a while in a major,” Koepka said. “You know, I was just there to cheer Paul on. That was it. Just try to help him get it in the house and see how well he could finish, because I had put myself out of it already.”

Woods, a four-time PGA Championship winner, had his best round of the tournament Sunday with a 3-under 67, finishing in a tie for 37th at 1 under. Phil Mickelson, the 2005 PGA winner, shot a 3-over 73 and finished in a tie for 71st at 4 over.

World No. 1 Justin Thomas shot an even-par 70 and finished in a tie with Woods and four others in 37th place. Jon Rahm moved back atop the world rankings with a tie for 13th place, finishing at 7 under.

The tournament was originally scheduled for May 14-17 but was rescheduled for this weekend because of the pandemic. Because of all the tournament rescheduling, this was the first time since 1971 that the PGA Championship served as the season’s first major.