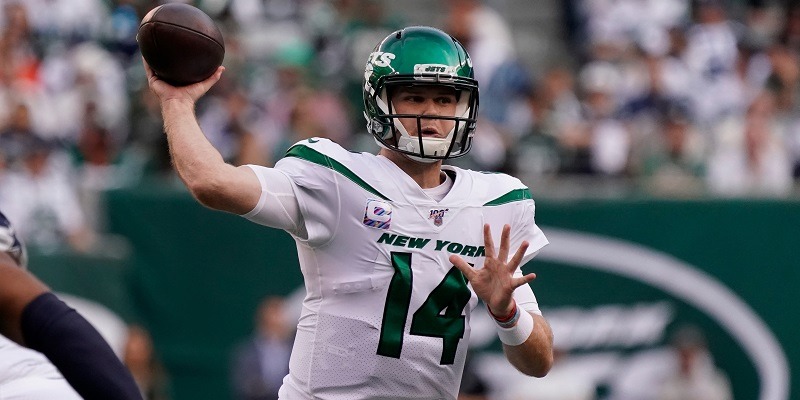 Sam Darnold made a winning return to the New York Jets on Sunday afternoon, throwing for two touchdowns as the Jets earned their first victory of the season by holding off the visiting Dallas Cowboys 24-22 in East Rutherford, N.J.

The Jets, who scored just two offensive touchdowns in their first four games, avoided the franchise’s first 0-5 start since 1996. The Cowboys (3-3) have lost three straight.

Darnold missed the previous three games — a span in which the Jets scored more touchdowns on defense and special teams (two) than on offense (one) — due to a bout with mononucleosis and subsequent enlarging of his spleen. The 22-year-old second-year quarterback, wearing a flak jacket to protect his midsection, was 23 of 32 for 338 yards and two touchdowns, including a 92-yarder to Robby Anderson.

Le’Veon Bell rushed 14 times for 50 yards and one touchdown for New York.

Brett Maher booted three field goals — including a 62-yarder as time expired in the first half — and Ezekiel Elliott rushed for 105 yards and one touchdown for the Cowboys. Quarterback Dak Prescott was 28 of 40 for 277 yards. He was sacked once and did not throw a touchdown or interception.

Elliott’s 5-yard touchdown run pulled the Cowboys within 21-16 with 6:30 left in the fourth quarter, but Darnold oversaw a seven-play, 57-yard drive that ended with kicker Sam Ficken booting a 38-yard field goal with 3:27 remaining.

The Cowboys pulled within two points on Prescott’s 4-yard scramble with 43 seconds left, but Prescott’s two-point conversion pass to Jason Witten was broken up by Marcus Maye and the Jets recovered the subsequent onside kick.

Dallas’ Amari Cooper, the NFL’s second-leading receiver entering the weekend, had just one catch for 3 yards before leaving in the first quarter after aggravating a quad injury.

Darnold wasted little time reminding the Jets what they’d missed in his absence. New York moved 83 yards in 14 plays on its second drive, which was capped by Bell’s 2-yard scoring run.

Maher’s first field goal, a 50-yarder on the first snap of the second quarter, pulled the Cowboys within 7-3. Dallas almost took the lead later in the period, but Darnold followed up the Jets’ goal-line stand — Prescott was sacked on fourth-and-2 from the New York 7-yard-line — with his touchdown pass over the middle to Anderson, who raced the last 50 yards untouched.

The touchdown was the second-longest in franchise history. Ken O’Brien threw a 96-yard touchdown pass to Wesley Walker on Dec. 8, 1985.

The Jets extended their lead to 21-3 on Darnold’s 5-yard touchdown pass to Ryan Griffin with 27 seconds left in the first half.

Maher then made history with his 62-yard field goal. He is the first kicker ever with two field goals of at least 62 yards. Maher nailed a 62-yarder last Dec. 9 against the Philadelphia Eagles.

Maher kicked a 32-yard field goal a little less than halfway into the third quarter, the only points scored that quarter. He also missed a 40-yard attempt wide right early in the fourth quarter.