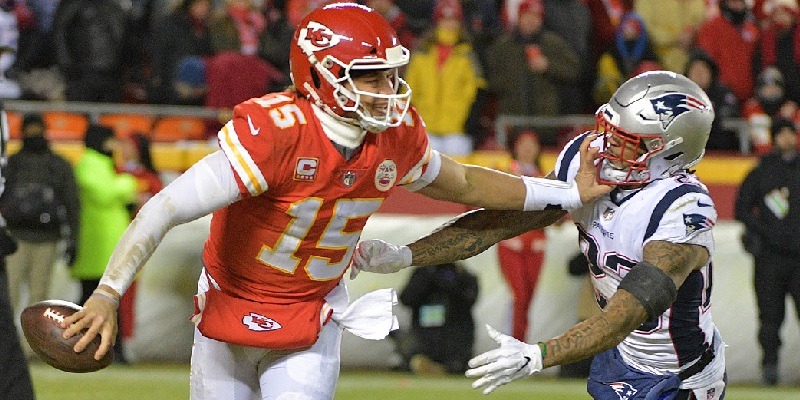 Among a handful of juicy Week 14 matchups, the Kansas City Chiefs’ trip to face the New England Patriots grabs the spotlight because of the Patrick Mahomes vs. Bill Belichick clash.

The Chiefs’ offense vs. Patriots’ defense produced two of last season’s best tactical battles, and Round 3 should not disappoint.

1. Reid, Mahomes should know what to expect

No matter Belichick’s plan, the Chiefs will see heavy doses of man coverage. Not only is that the Patriots’ defensive identity, but it has given Kansas City trouble this season, and it worked well in last year’s AFC Championship Game.

Belichick’s plan in January was very defined. He fully dedicated one cornerback (usually Jonathan Jones) and safety Devin McCourty to Tyreek Hill on almost every snap, leaving all others in man coverage with no help. He put cornerback J.C. Jackson on tight end Travis Kelce and Stephon Gilmore on Sammy Watkins before flipping those assignments late. Up front, he rushed four or five (occasionally six) defenders with a litany of stunts and twists.

The Patriots won’t roll out an identical plan, but the approach toward Hill worked (just one catch for 42 yards) and should continue. Given Watkins’ quiet season, Gilmore might take Kelce all game, or at least on red-zone and third-down snaps as he did recently against Zach Ertz. Belichick could put Jackson on Watkins, or on Mecole Hardman, after the cornerback matched similarly speedy Will Fuller often last week.

Belichick’s array of stunts and twists could be even more effective than last year, as the Chiefs’ O-line has been banged-up and spotty. Likewise, Mahomes has played somewhat looser and more recklessly of late, getting away with several near-interceptions. The Patriots’ approach — which included variations of Cover-0 blitzes in both meetings last year — could be to encourage Mahomes’ impatience.

Andy Reid’s priority should be to get Mahomes playing on-schedule early with quickly defined concepts to attack man coverage. The Chiefs caught fire late in the January game with pick plays and screens, many featuring running back Damien Williams. They shouldn’t wait to unveil those this time.

Kansas City also featured running backs on vertical routes in both meetings last year, including three to Williams in the championship game that failed for various reasons — pressure, an overthrow by Mahomes and an unexpected Cover-2 call. The Chiefs will surely try again Sunday, whether it’s with Williams (battling injury) or newly re-signed Spencer Ware.

2. Why Spagnuolo should keep it simple

Meanwhile, the Patriots’ offense continues to struggle, hindered by a weak O-line and a lack of weapons. The latter is a growing issue, as more teams have zeroed in on two key players: Julian Edelman and James White.

On Sunday, Texans D-coordinator Romeo Crennel often put two defenders on Edelman and a cornerback on White, who is essentially a receiver. The Patriots added two touchdowns once Crennel went to soft zones late, but they otherwise produced little.

Chiefs D-coordinator Steve Spagnuolo has the personnel to do the same. He could use safety Tyrann Mathieu to double-team Edelman alongside a cornerback, or simply dedicate Mathieu to White and put two others on Edelman.

It might be best to set those tactics aside against Tom Brady. Rather than giving the QB an opportunity to identify ploys and exploit their weaknesses, Spagnuolo should simply load up against Brady’s favorite targets and dare him to beat the Chiefs elsewhere.

The Saints’ D has slipped since last year (4.1 yards per carry compared to 3.6), but still ranks third in total rushing yards allowed. Defensive tackles Sheldon Rankins and David Onyemata are rugged, Cameron Jordan is downright dominant, and the Saints mix up fronts and use stunts very well.

But New Orleans enters with a glaring weakness that the 49ers are perfectly suited to exploit: a thin linebacker group. The wildly underrated Demario Davis is healthy, but Kiko Alonso and A.J. Klein are both hurt, prompting the Saints to bring back Manti Te’o.

San Francisco head coach Kyle Shanahan is a master at embarrassing linebackers, giving them false keys in the run game and off play-action. The latter could be especially effective Sunday with the Saints down one or two starters. Shanahan will look to isolate Te’o (or Stephone Anthony or Craig Robertson if they play) on George Kittle at times, but that’s not all.

He’ll also employ designs with Kyle Juszczyk or tight end Ross Dwelley showing lead-blocking action from the backfield, only to release on a route — often a wheel/rail route down the sideline. That sort of play-action is extremely hard to defend, even for top linebackers.

The Buffalo Bills’ defense is terrific, and it would earn more recognition if the Patriots’ and 49ers’ units hadn’t been so dominant. But the Bills don’t match up especially well against Lamar Jackson and the Baltimore Ravens.

The Bills’ best run defenders are ends Jerry Hughes and Trent Murphy, but the Ravens could simply leave them (especially Murphy) unblocked and let Jackson read them on option plays. Likewise, linebacker Tremaine Edmunds has sharpened his instincts and discipline in Year 2, but he’s still susceptible to misdirection, the core of the Ravens’ offense.

Linebacker Matt Milano is sharp and reliable, and interchangeable safeties Micah Hyde and Jordan Poyer can cover in man or zone anywhere on the field. But none of the three has a frame (all 6 feet even) to handle 6-5 tight end Mark Andrews. That job could fall to a cornerback, perhaps even top corner Tre’Davious White.

Buffalo head coach Sean McDermott is an excellent game-planner, so these issues aren’t insurmountable, but the task is tall. His best approach might be to force Jackson to hand off on option runs and hope the Bills’ interior can stop Mark Ingram.

The Seattle Seahawks’ first meeting with the Los Angeles Rams — way back in Week 5 — was Russell Wilson’s best game of the season, and perhaps in multiple seasons.

Wilson created several unbelievable — even by his standards — off-schedule plays, including a poster-worthy, back-pylon prayer to Tyler Lockett, a handful of Houdini escapes and a few laser-accurate jump throws while getting clobbered.

The Rams’ defense has improved since, with Jalen Ramsey giving coordinator Wade Phillips more flexibility and Aaron Donald — who hit Wilson just once in Week 5 — heating up.

Wilson hasn’t been quite as sharp the past few weeks, and the late-in-the-down playmaking has waned. That’s OK if Seattle’s run game keeps humming, but odds are Wilson’s magic will be needed at some point Sunday night.