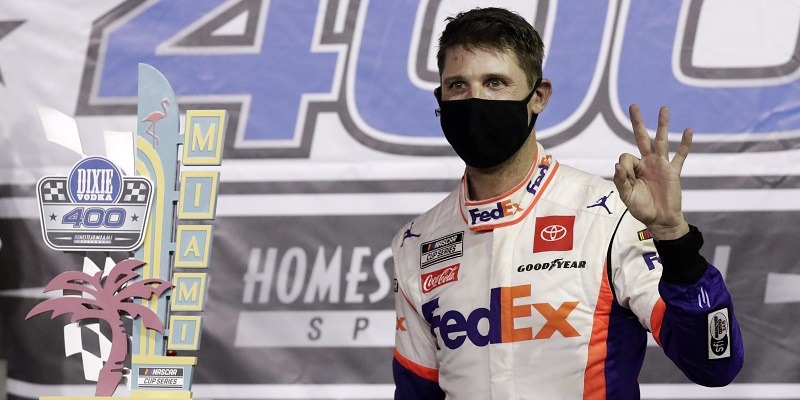 It took him more than seven hours to get it, but Denny Hamlin became the NASCAR Cup Series’ first three-race winner of the season when he drove to a dominating victory in Sunday’s Dixie Vodka 400 at Homestead-Miami Speedway.

Hamlin won the first two stages and led the most laps (137) by far in getting the victory in his Joe Gibbs Racing Toyota. The victory was his third at the 1.5-mile Homestead oval and the 40th in 518 career Cup starts.

“I had a strong car all day, obviously with the laps led,” said Hamlin, who kicked off the season by winning the Daytona 500.

“I knew that if I was just patient and ran the pace I wanted and the pace I was comfortable with, we were going to be hard to beat in the long run,” Hamlin said.

The seven-hour race came as a result of a number of delays for lightning.

“I just needed to get through lapped traffic better,” Elliott said.

His “Camaro was plenty good enough to win,” Elliott said. “I thought we executed a really nice race. I kept it off the wall almost the whole race – I got it there at the end. But I’m proud of the effort. We’re bringing fast cars right now.”

Fourth was rookie Tyler Reddick of Richard Childress Racing. His finish was by far his best in Cup. He got it by finding a comfort zone running near the wall most of the night.

“It was just a struggle to figure out what lane was going to be better for me in trying to get the lead and hold it,” said Reddick, who won two Xfinity Series championships. “All in all, solid effort.”

NASCAR allowed up to 1,000 spectators, all members of the military or first responders, to sit in the grandstands. That made the race the first sporting event in America to be watched live by spectators since March because of the Covid-19 pandemic.

Fans had to undergo health screenings before entering and were required to wear face masks and socially distance by six feet at all times, NASCAR said.

The start of the race was delayed by little more than an hour after a light rain began to fall just as the command to start engines was to have been made. After five laps, the yellow flag waved for lightning within eight miles of the track. Shortly after that, the red flag was shown.

At about 6:20, teams again fired the engines. But before the cars could leave the pits, NASCAR reported another lightning strike within eight miles of the speedway and the rule that says races cannot be restarted until 30 minutes of the last string was invoked. At 7:10, the race went green. On Lap 33, more lightning and another red flag.

The race restarted yet again at 8:15.

Sunday’s was the 12th race of the season and eighth since the pandemic forced a two-plus-month hiatus.