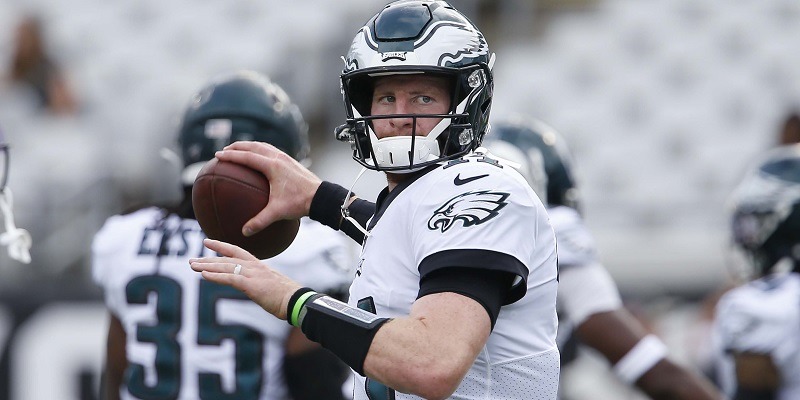 Philadelphia players rallied to Carson Wentz’s defense Monday after unnamed teammates reportedly called the Eagles quarterback “selfish” and “egotistical.”
A report criticizing Wentz by PhillyVoice.com cited “more than a half dozen” players who requested to remain anonymous, “fearing repercussions.”
Among the claims in the report were that Wentz “bullied” offensive coordinator Mike Groh, played “favorites” by over-targeting Pro Bowl tight end Zach Ertz, and generally acted “like he’s won 10 Super Bowls.”
Wentz, 26, received immediate support on social media from All-Pro defensive tackle Fletcher Cox, offensive linemen Lane Johnson and Brandon Brooks, and Ertz.
“None of that is true,” Cox wrote on Twitter. “We are all behind him 100 percent.”

Reading through this Carson Wentz thing and as a leader on this team none of that is true Carson is a great teammate and great player we are all behind him 100% he’s our guy and will come back and prove the world wrong. If you got a problem feel free to @ me I’ll respond

“Don’t believe everything you read!!!” Ertz tweeted. “Carson has been nothing but a GREAT person, GREAT teammate and GREAT leader since Day 1.”

Don’t believe everything you read!!! Carson has been nothing but a GREAT person, GREAT teammate and GREAT leader since Day 1. Our locker room stands behind him all the way. We can’t wait to get back to work and be the best team we can be in 2019! #FlyEaglesFly

Johnson tweeted that “whoever wrote that article needs to check their ‘sources.'”

Whoever wrote that article needs to check their “sources”. #fakenews

Carson has been and is our leader and our QB. Y’all know where to find me if you have any issues.#flyeaglesfly

The No. 2 overall draft pick in 2016, Wentz is 23-17 in three seasons as the starter in Philadelphia. His last two regular seasons have ended with injuries, but head coach Doug Pederson confirmed last month that Wentz is “our guy” heading into 2019.
–Field Level Media