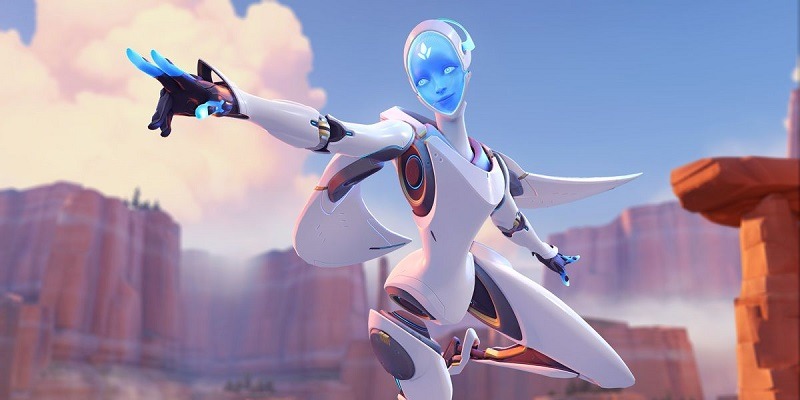 Overwatch’s newest hero, Echo, was released to the Overwatch Public Testing Realm (PTR) to much anticipation last week. Ironically, it might not be too long before Overwatch fans get sick of watching Echo dominate professional and high-level play.

Let’s start with Echo’s kit: the defining feature of Echo (apart from her ultimate, which we’ll get to), is her Flight ability.

After an initial surge of movement, Echo can fly freely in any direction. Once the ability ends three seconds later, Echo can use her Glide passive to drift around in mid-air. Echo’s Flight is incredibly strong due to it’s free-flowing movement and that it’s on a mere six-second cooldown.

What’s more, Echo’s ability to stay in the air without having to expend fuel like Pharah makes her the ruler of the skies.

Echo’s mobility allows her to instantly go on flanks or else appear in enemy backlines, where her medium-range damage kit allows her to deal some serious damage. Echo’s primary fire, Tri-Shot, is a projectile, shotgun-like weapon that fires three pellets that deal 17 damage each (51 damage total if all connect).

At a fire rate of three shots per second, and with 15 charges (five shots) in each clip, Echo’s potential to break down shields and assassinate targets from the air makes her a versatile threat.

Echo’s damaging abilities only compound the threat she poses further.

Her “E” ability, Focusing Beam, is a beam attack that lasts for 2.5 seconds on an eight-second cooldown. Focusing Beam normally deals 50 damage per second, though the damage gets increased to a whopping 200 damage per second against targets under 50 percent of their maximum health (including constructs like turrets and shields).

With such a powerful shield-breaking tool that doubles as an execute, Echo is great against tanks, especially considering she can fly away from most tanks’ effective ranges.

Echo’s other damaging ability makes her an adept assassin capable of bursting down low-health targets.

Her secondary fire is called Sticky Bombs, Echo launches six bombs that attach to the first thing they hit, dealing five damage on impact and detonating for 30 damage a second later. If every bomb hits, Echo can one-shot 200 health targets, making it ideal for taking out enemy hitscan DPS that are trying to keep Echo out of the sky.

Alternatively, Sticky Bombs make for a good zoning tool if used in a choke, preventing the other team from moving unless they want to take big damage and give Echo precious ultimate charge.

The biggest way Echo changes the game is her ultimate, Duplicate. Echo can use her ultimate to choose any enemy hero on the battlefield (except another Echo) and become a copy of that hero. The caveat is that Echo’s copy gains ultimate charge at 650 percent rate.

This means that Echo can effectively become any hero and almost instantly have an ultimate (or several) waiting to go for the 15-second duration of Duplicate.

In preliminary looks at the hero in top-tier play, Echo warps the game around her since she has tons of damage, including tools to help take care of both high health and low health targets.

When Echo has Duplicate available, it becomes nearly impossible to plan around what Echo’s team will do in a fight, since that team essentially has access to 11 possible ultimates (five of her teammates, six possible ults from the Duplicate).

As a result, teams will need to prioritize shutting Echo down in teamfights to prevent Echo from getting value out of Duplicate. Of course, when Echo’s Duplicate runs out of health she becomes regular Echo again, complete with her toolchest of damage. But at least the threat of being Reinhardt Earthshattered twice or whatever the case may be will be neutralized.

In games where Echo is present, she will be treated similarly to Pharah: teams will either need to mirror the Echo pick or else hard-commit to shutting her down with a variety of hitscan DPS heroes.

Echo’s Flight makes her a good partner to run alongside a Mercy, and her ability to deal damage from all kinds of ranges while staying safe make her an ideal DPS in dive compositions. This is compounded by the fact that most hitscans that can threaten her, like Widowmaker, are susceptible to dive.

That being said, Echo’s raw strength and versatility make her a good addition to any team composition.