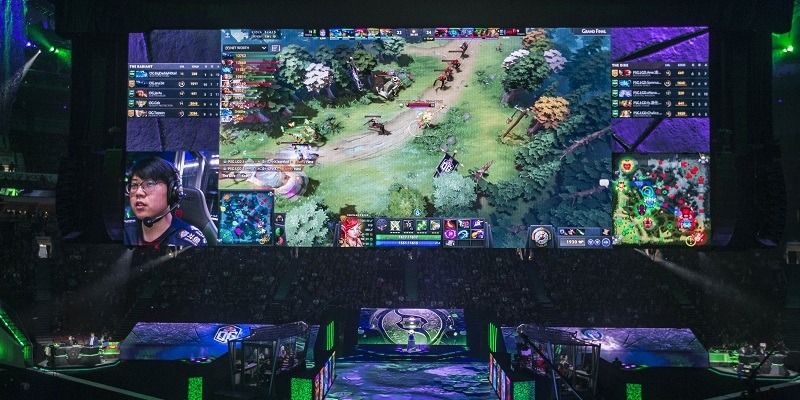 Esports are passionately followed by millions of fans around the globe on a daily basis. With the games featuring a wide range of formats, competition types and schedules, Field Level Media is producing a series of overviews to introduce you to the most popular titles, teams and personalities.

Dota 2 is a multiplayer online battle arena game (MOBA) that was developed and published by Valve Corporation. It was released in 2013 as the sequel to Defense of the Ancients (DotA).

In the game, two teams of five players compete against each other to defend their bases on a map while battling to destroy the “Ancient” structure in their opponent’s base.

Each of the 10 players controls a “hero,” which is a character with a specific set of powers and abilities. Players work to collect points, items and gold (via “farming”) during combat against other players.

The five competitive positions each play a specific role.

At its peak, Dota 2 had more than a million concurrent players on Steam. The Dota 2 community can also create game modes, maps and cosmetics that are uploaded to the Steam Workshop.

Dota 2 features one of the most robust — and lucrative — esports scenes in the gaming industry.

The marquee event is The International (TI), which dates back to the original competition between 16 teams at Gamescom in 2011. In 2013, the prize pool began to be crowdfunded through “Compendium,” an in-game battle pass with 25 percent of sales going toward the prize pool.

More than $2.8 million was raised for TI in the first year, and the battle pass revenue has increased every year since, topping $34 million in 2019.

Dota 2 is extremely popular in Asia, with Valve distribution partner Nexon investing in local leagues in South Korea. Valve also sponsored the Dota 2 Asia Championships beginning in 2015, which featured a prize pool of more than $3 million raised through Compendium sales.

The Dota Pro Circuit (DPC) debuted in 2017. Teams are awarded points for their performance in events staged around the world. The top 12 teams receive direct invites to TI, with all other teams then needing to go through a grueling regional qualifying process in an attempt to claim one of the final six spots.

While OG and Liquid remain two of the most prominent teams in the Dota 2 esports scene, Team Secret has emerged as arguably the best in the world after claiming a pair of Majors and a fourth-place TI showing in 2019 and kicking off 2020 by winning DreamLeague Season 13.

The one constant has been Clement “Puppey” Ivanov, a 30-year-old Estonian who is currently the team’s captain. Finland’s Lasse “MATUMBAMAN” Urpalainen joined as the team’s carry in November 2019 and plays alongside Puppey, Poland’s Michal “Nisha” Jankowski, Sweden’s Ludwig “zai” Wahlberg and Jordan’s Yazied “YapzOr” Jaradat.

The Chinese Dota 2 scene includes several of the world’s elite teams, including Invictus, PSG.LGD, Royal Never Give Up and ViCi Gaming. Europe’s Nigma and Alliance plus the Commonwealth of Independent States’ Gambit Esports are three other top teams, along with Evil Geniuses from the United States.

Valve’s Twitch channel is the main streaming platform to watch events, and the company uploads all broadcasts for TI and other tournaments to its YouTube channel.