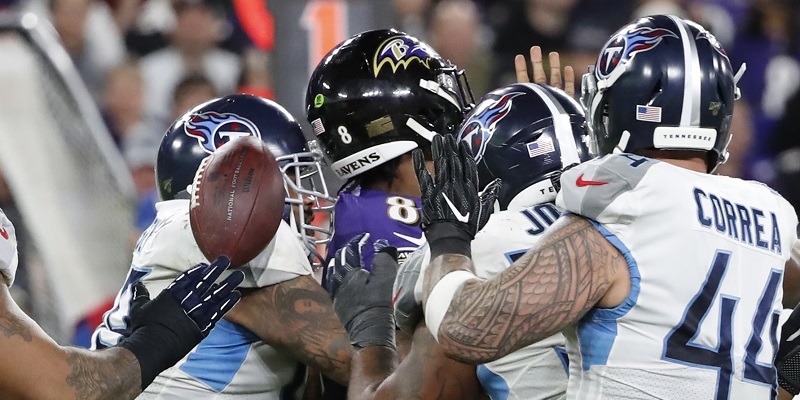 The Tennessee Titans’ defense did not expose Baltimore Ravens quarterback Lamar Jackson as a fraud in Saturday’s stunning 28-12 upset.

The league’s clear MVP, Jackson’s performance Saturday was far from a disaster, as he had dazzling moments as a runner and a passer.

But with an aggressive game plan and favorable game script, the Titans poked at Jackson’s few holes before delivering in critical moments.

Game flow was especially crucial. Tennessee’s ball-control offense ran efficiently and thrived in the red zone, maximizing the defense’s opportunism. That put the Ravens at the game script’s mercy — a rarity after the opposite was true almost all season.

With that in mind, let’s break down five moments that illustrate how Baltimore’s offense faltered.

The Ravens called their favorite short-yardage play, QB power from an unbalanced line.

All season, Baltimore has used QB Power (from an unbalanced line) on key short yardage situations. The first 4th down attempt vs TEN was no different. Not sure why Jackson didn’t follow the LG wide, but a great play by TEN DL anchoring. #TENvsBAL pic.twitter.com/fzlGOhP2zL

Jackson probably would have converted if he followed Bozeman, especially with Ricard plowing outside linebacker Kamalei Correa. During the regular season, the Ravens were 6-for-6 on fourth-and-1 and 14-for-18 on third-and-1 (excluding plays involving special teams or backups). Bottom line: This was an outlier.

One play later, the Titans hit a 45-yard touchdown to make it 14-0, the first major shift in game script.

The first part of the Titans’ game plan targeted the Ravens’ run game. On early downs (i.e. running situations), Tennessee played with eight or even nine defenders in the box and attacked aggressively. They played primarily Cover-4, letting both safeties play flat-footed and downhill, with almost everyone stepping forward at the snap.

The idea was to flood running lanes with bodies and force Jackson to the perimeter. The Buffalo Bills took a similar approach in Week 14, when they allowed just 24 points. Such aggression, however, risks big plays. Baltimore hit them all year, often off play-action, like the 61-yard TD that keyed the Buffalo win.

Their first play after the fourth-and-1 stuff was a perfect example. Jackson booted left off play-action and spotted Seth Roberts on an over route against Cover-4. Jackson’s throw wasn’t perfect — with safety Kenny Vaccaro playing Roberts’ upfield hip, the throw should be lofted — but it got through Vaccaro and hit Roberts square in the hands.

Roberts was already 20 yards downfield, and he likely had a 74-yard TD if he caught it. Cornerback Adoree’ Jackson foolishly went for the interception rather than playing Roberts, and the wideout would have run scot free down the sideline.

One of the #Ravens‘ biggest missed opportunities came on their first snap after the first 4th-and-1 failure.

Adoree’ Jackson waits on INT instead of playing Seth Roberts, who has a 74-yard TD if he can catch the ball. Jackson even got in Logan Ryan’s way in pursuit#Titans pic.twitter.com/SL75P1Kg7N

It was a golden opportunity to exploit Tennessee’s aggression — and cut the deficit to 14-7 — but it led to a three-and-out.

One drive later, Baltimore missed another golden chance off play-action, this time because of Jackson’s read.

Coordinator Greg Roman used a rare under-center formation, with tight end Hayden Hurst at fullback, and showed hard, downhill run action. With Hurst looking like a lead blocker, eight Titans stepped hard downhill, including Hurst’s man-coverage mark, cornerback Logan Ryan. Hurst blew by Ryan before he realized it was a pass and was 5 yards clear up the seam.

Hurst was clearly the primary read, but Jackson moved on. He likely saw single-high safety Kevin Byard and believed the middle seam would be covered, but Byard was far too deep to stop Hurst, who likely would have scored. Jackson instead went to Marquise Brown’s out route, but a wobbly pass was knocked away amid tight coverage.

Goes right by #Titans CB Ryan, but Jackson appeared to read single-high S (Byard) and assume Hurst wouldn’t be open. Should be a 29-yard TD pic.twitter.com/F01j32nmUR

This was yet another near miss for a different reason — this time, Jackson missed the throw due to pressure.

Jackson didn’t appear to change the protection, but the line appeared to expect the linebackers’ blitzes — Stanley never looked to block edge rusher Harold Landry. Whether planned or not, Jackson handled the free rusher with outstanding pocket movement, stepping up sharply and causing Landry to whiff.

But as Jackson stepped up, rookie center Patrick Mekari couldn’t quite sustain against Jones, who got in Jackson’s face and may have hit his arm. The result was a high throw to Brown, who was isolated on Ryan on a post route with room in front for a touchdown.

Not sure if Lamar Jackson wanted Landry to come free, but he evades him so easily (and LT Stanley never looks outside) that it looks planned. Outstanding step-up while staying ready to throw.

Three plays later, Jackson was stuffed on fourth-and-inches. Six plays and 81 yards after that, the Titans led 21-6. A better throw from Jackson — and perhaps a slightly better block by Mekari — could have made it 14-14.

Tennessee used various 3-, 4- and 5-man rushes with stunts and twists all night, with deception necessary against a strong Ravens O-line. Game script was critical, too, as Baltimore faced more obvious passing situations than it did for weeks at a time during the regular season.

The Titans did not provide constant pressure, but it was certainly timely, like Jurrell Casey’s strip-sack.

With Mark Ingram shifting to the slot, Casey widened pre-snap, and Ingram chipped him from the outside. That should have neutralized Casey, but Stanley set wide, like he didn’t anticipate Ingram’s chip. When Casey went inside, Stanley looked to pass him to Bozeman, but Bozeman was occupied with linebacker Rashaan Evans, who rushed to contact but didn’t continue.

Again, Jackson showed great pocket movement, initially anyway. He swiveled the ball away from Casey, put two hands on it and stepped up while staying in position to throw. But after creating extra time, Jackson took too long, pumping twice before being stripped.

While Casey made a great play, it was an uncharacteristic error from the All-Pro Stanley, who had schematic help. Six plays later, it was 28-6, summing up the Ravens’ night.

On eight of 11 drives, Baltimore gained at least 39 yards and moved inside the Tennessee 40-yard line. Despite the Titans’ plan, the Ravens’ run game was productive, gaining 185 yards on 29 carries (6.4 average) — including 106 yards on 21 carries (5.0 average) on non-scrambles.

Jackson’s interceptions were obviously problems, but they weren’t egregious errors. The first throw was a hair high but hit both of Mark Andrews’ hands. The second was the correct read on third-and-5, but Jackson’s wobbly throw to the sideline was short and inside.

Sideline throws were an issue throughout the night, and those are Jackson’s biggest weakness right now. But just as striking Saturday was the progress he has made as a passer in one year.

Forced into comeback mode in last year’s playoffs, Jackson was overwhelmed and largely reverted to sandlot playmaking. In the same situation this year, he delivered several tight-window flicks — many on third-and-long — and flashed nuanced pocket movement. He missed some throws, but he performed far better than the scoreboard suggested, especially considering he played mostly on the Titans’ terms.

A number of his best throws came on third down, including some third-and-longs#Ravens #Titans pic.twitter.com/mZszQVMLuX

Tennessee, of course, deserves credit for turning the game script in its favor. The Titans weathered the run game and used key plays for a big lead. That created more pass-rush opportunities and allowed them to back off the aggression earlier.

Jackson & Co. failed to cash in their best chances at big plays. Now they have an entire offseason to stew on it.