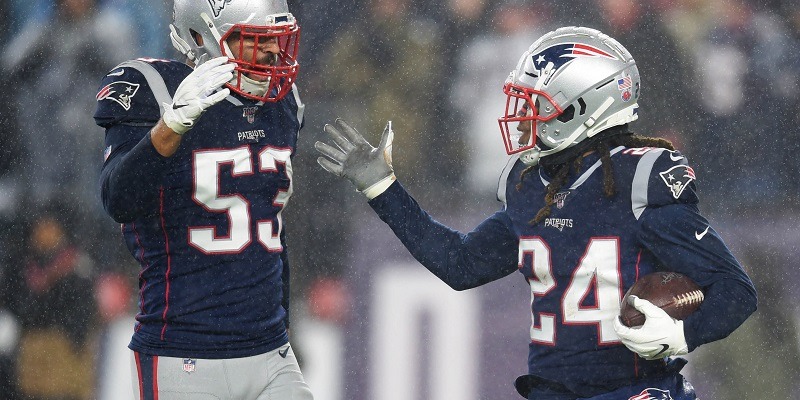 New England Patriots cornerback Stephon Gilmore has had a terrific season against a weak slate of wideouts, but facing perhaps his biggest challenge yet on Sunday, he dominated.

Gilmore plastered Dallas Cowboys wideout Amari Cooper on 22 snaps in man coverage and eight more in zone. Cooper garnered just two targets and caught none, with his most notable box-score stat a tackle on Gilmore’s interception.

Cooper has been fighting a knee injury, and miserable conditions made life hard on the Cowboys’ passing game, but Gilmore still deserves tremendous credit. Let’s take a closer look at his shutout.

Crossing routes are supposed to beat man coverage. Not only do they provide opportunities for picks and rubs, but they let receivers run away from defenders’ leverage. Such routes can be particularly difficult for bigger cornerbacks to defend, due to the quickness and speed required.

Gilmore though, at 6-foot-1 and 202 pounds, is fantastic against crossers. Much like Aqib Talib during his Patriots and Broncos days, Gilmore has the speed to keep up but also the savvy and length required to close the throwing window on the run.

On third-and-short early Sunday, Gilmore handled Cooper’s crosser despite a handicap. Cooper motioned from wide right into a bunch just before the snap. Having never come to a stop, Cooper had a slight head start and also got light rubs from the other routes in the bunch.

But Gilmore subtly used a slingshot technique — lightly hooking Cooper’s right shoulder to slingshot himself toward Cooper’s left side — and partially undercut the route. Quarterback Dak Prescott came off Cooper and threw incomplete to Randall Cobb.

Stephon Gilmore is a master vs. crossing routes. Here, #Cowboys help Amari Cooper by bringing him in motion to bunch, getting cleaner release on drag.

But Gilmore uses subtle “slingshot” (watch his right hand) to gain ground, undercut the route without a flag#Patriots #GoPats pic.twitter.com/znmmhhJfjZ

Gilmore’s interception came on a near mirror image, but with Cooper already in the bunch formation. Backed off slightly by the bunch, Gilmore wasn’t close enough to use the slingshot technique this time, but he quickly closed the gap.

Chasing down drag routes takes more than speed. Gilmore must run essentially as close to Cooper as possible while directly behind him, like a car trying to tailgate mere inches from a car in front. Gilmore must avoid interfering with Cooper while also not tripping, and then transition to undercut the throw at the perfect time.

When Prescott’s throw was slightly behind, Gilmore laid out. Most cornerbacks would merely tip it away, but Gilmore got both hands on it, then suddenly rolled his body hard left in midair, landing on his side to ensure the ball could not hit the ground. That’s an instinct you usually see from receivers. This catch was perhaps the best made by any player from either team all game.

The Cowboys ran Cooper on four or five other crossers, with Gilmore hanging close and occasionally getting safety help. Dallas did finally beat him, when Cooper got a step on third-and-3, and Prescott put it on the money.

But every no-hitter needs a little luck, and Gilmore got it when an offensive holding call nullified the catch. Cooper beat Gilmore only once more, on the game’s deciding play, and Gilmore again got a little luck.

After Gilmore sunk in mirror press-man, Cooper faked outside, released inside and broke free on a post on fourth-and-11. But Gilmore stayed close, forcing Prescott to throw in front of Cooper. It wound up well in front and low, requiring a dive from Cooper, who gathered the ball but didn’t roll his body — as Gilmore did on the INT — to ensure it couldn’t hit the ground. The incompletion all but sealed the Patriots’ win.

The fourth-and-11 to Amari Cooper was the only time he troubled Stephon Gilmore with his release.

Got him to open hips outside, stemmed back in. But Gilmore stayed close enough to require a good throw; it was a hair out in front, and Cooper couldn’t hang on.#Patriots #GoPats pic.twitter.com/lhxfDHemyy

That play stuck out like a sore thumb, because it was the only time Cooper’s release even remotely troubled Gilmore.

Despite his size, Gilmore plays much more mirror press coverage (cutting off a receiver by mirroring him) than physical press (trying to jam the receiver off his path). He gets depth quickly from a press position, keeping a cushion temporarily but then impeding the route — without taking a penalty — with his positioning further up the field.

That technique repeatedly stymied Cooper. Gilmore cut off his outside releases on fades and closed from the same position against comebacks or curls. Prescott didn’t even look Cooper’s way often, and quickly came off when he did.

Of course, Gilmore made plays outside of covering Cooper. He forced Prescott’s throw out of bounds to Tavon Austin in man-to-man coverage on third-and-13. On a pair of Cover-2 snaps, he blew up Jason Witten in the flat, then nearly had an interception when Witten dropped a similar throw.

Gilmore’s other near-interception came on a throw that wasn’t targeting his man. In the red zone in the fourth quarter, he took away Cooper’s hitch near the sideline but watched Prescott as the QB rolled right, toward Gilmore. When Prescott fired for Witten (covered by Patrick Chung in the end zone), Gilmore came off Cooper and laid out. He again got two hands on the ball but couldn’t hang on. Still, he averted the game-tying touchdown.

This was nearly the cherry on top for Stephon Gilmore, who reads QBs while in man coverage better than anyone. Has Cooper covered, but eyes go back to Prescott.

Anticipates throw, great diving range. This catch actually might have been easier than his INT#Patriots #GoPats pic.twitter.com/sBbmwjxR2E

The last pure cornerback (Charles Woodson was a safety/slot corner by 2009) to win Defensive Player of the Year was Deion Sanders in 1994, when he had six interceptions returned for a total of 303 yards and three touchdowns. Neither peak Champ Bailey (10 INTs, 1 TD return and 21 passes defensed in 2006) nor Darrelle Revis (six INTs, 1 TD and 31 PDs in 2009) managed the feat.

Gilmore (four INTs, 1 TD, 13 PDs) probably won’t either, but he has a reasonable case, as the best player on a suffocating defense. Despite facing few top receivers all season, he delivered a signature performance against Cooper when one was needed Sunday.