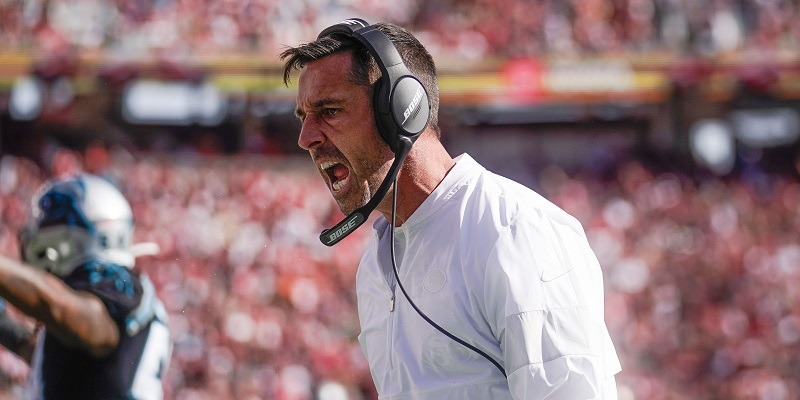 Shanahan’s offense has become mandatory weekly studying for coaches around the league, primarily for his run-game volume and creativity. The mastermind took it up a notch on Sunday, as his San Francisco 49ers roasted the Carolina Panthers for 232 rushing yards.

“This running game that I’ve known, Kyle Shanahan has taken it and just put it on steroids,” FOX color analyst Mark Schlereth said on the broadcast during the fourth quarter. “… The amount of volume of runs that they have is just amazing.”

Schlereth knows a thing or two about Shanahan’s offense, having played under Kyle’s father, Mike Shanahan, for six years in Denver and winning two Super Bowls.

Most fascinating was that the 49ers didn’t exactly manhandle the Panthers’ front. Dontari Poe, Gerald McCoy & Co. actually held their ground most of the day, especially against San Francisco’s core runs.

Of 35 non-kneeldowns, 25 gained 4 or fewer yards, and 17 gained 2 or fewer. Most of these were standard split zone and outside zone from under center, which make up the base of Kyle Shanahan’s run game.

Instead, Shanahan carved up the defense — led by perhaps the NFL’s smartest defender, Luke Kuechly — with a dizzying array of exotic runs. A whopping 150 yards and four touchdowns came on just five runs, four of which appeared specifically designed for this week. Let’s examine them.

The 49ers use shotgun just 36 percent of the time (31st in NFL) and run on only 27 percent of snaps from shotgun, but they played off those tendencies perfectly. On this play, tight end Ross Dwelley — the starting fullback with Kyle Juszczyk injured — began to Jimmy Garoppolo’s left in the split gun.

Tevin Coleman’s 22-yard gain was nice use of formation and motion by Kyle Shanahan. Caught Panthers stunting inside with a sweep outside.

Shanahan likely saw something on tape that told him the Panthers would react this way. The 49ers’ O-linemen appeared ready for the slant, as they calmly sealed both D-linemen inside, creating acres of space for the sweep outside. Thompson’s initial drop gave Dwelley room to climb and seal him, and Burns’ alignment and slant made it easy for Kittle to climb right to Kuechly. With one defender unblocked as Garoppolo faked a backside throw, the 49ers had seven blockers for only six defenders.

Later in the first quarter, Shanahan again used motion from the gun on Coleman’s 19-yard touchdown.

With Dante Pettis in orbit motion from right to left, Garoppolo handed to Coleman on outside zone to the right and faked a flare to Pettis. McCoy (the backside DT) was left unblocked, frozen by Garoppolo’s fake, which left only four defenders — including a cornerback — against four blockers on the front side.

On Tevin Coleman’s 19-yard TD, Kyle Shanahan used his base outside zone, but manufactured four blockers on four defenders (one a CB) by running it from shotgun, adding a fake flare from orbit motion and leaving backside DT McCoy unblocked. Flawless#49ers #Niners pic.twitter.com/Au3uib7iaJ

The resulting hole was more than 5 yards wide, letting Coleman burst easily through for the score.

Shanahan and Coleman struck yet again from the gun just before halftime, producing a 48-yard touchdown with terrific deception.

With Coleman to Garoppolo’s right, the 49ers pulled right guard Mike Person to the left, the natural direction for a run from shotgun. Person’s pull drew everyone’s attention — especially Poe (the nose tackle) and linebackers Kuechly and Thompson — but it was a false key.

In shotgun, runs usually cross the QB. RB Coleman, RG Person go that way, and the whole D flows with.

By design, Coleman immediately bent the run back right, hitting another gaping hole and turning on the jets to paydirt. In real time, it appeared Coleman made an outstanding improvisation. Looking closer, it’s clear that the run played out exactly as Shanahan planned (though safety Eric Reid’s blitz might have been a bonus).

The coach still had one more trick up his sleeve. In the third quarter, he unveiled a fake-jet-sweep, fake-toss handoff to wideout Deebo Samuel on a power scheme for a 20-yard TD.

The 49ers first motioned Samuel from the right to a bunch tight to the left of the formation. Once Samuel was set, Emmanuel Sanders (outside in the bunch) came in jet motion back to the right. Garoppolo took the snap from under center, faked the jet handoff, then faked a toss to Coleman to the left.

Earlier in the game, the 49ers had run the same look, but pitched it to the running back (Matt Breida) after the jet-sweep fake for 17 yards. This time, Garoppolo faked both and handed to Samuel, who followed pulling Tomlinson back to the right through a huge hole for the score.

“I mean I swear, they haven’t seen this play yet this season,” Schlereth said on the broadcast. “That’s a special breakout play for the Niners.”

The Panthers actually had seen this play this season, against a different opponent.

Deebo Samuel’s 20-yard TD was brilliant from Kyle Shanahan, attacking the Panthers D with the same play that got them for 20 yards vs. the Rams in Week 1 and for a TD in Cleveland last year (Week 14) #49ers #Niners

Luke Kuechly sniffs it out this time but is caught in traffic pic.twitter.com/X0epXWZXli

Shanahan’s friend, Sean McVay, ran it with the Los Angeles Rams for 20 yards to Robert Woods in Week 1 at Carolina.

And the Panthers saw the same play last year — the Cleveland Browns ran it for a 3-yard touchdown to Jarvis Landry in Week 14. (The Panthers and Saints then each used it against each other in Week 15.)

Kuechly actually recognized it — but he got caught in traffic as Samuel came around and was unable to stop it.

The 49ers added a 41-yard touchdown from Raheem Mostert on Shanahan’s standard split zone, but his exotic run schemes carried the day. (That’s not even mentioning several crafty play-action and screen designs Shanahan dialed up.)

The misdirection, window dressing and false keys fooled the Panthers and their all-world linebacker, allowing San Francisco to outclass a great defense despite missing its starting offensive tackles and fullback.