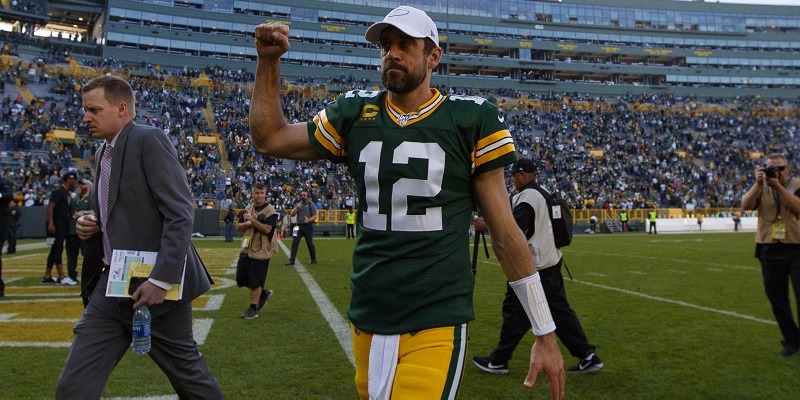 Let’s start there in examining some of Sunday’s biggest plays, beginning with the highlight of Aaron Rodgers’ outstanding performance.

The Oakland Raiders were hanging with the Green Bay Packers at Lambeau Field, moving the ball on long drives. Then Derek Carr got too ambitious, dove for the pylon and lost the ball for a touchback.

Rodgers made the mistake count double, firing a 37-yard touchdown to Jake Kumerow with 12 seconds before the half. That gave the Packers a 21-10 lead, which would balloon to 28-10 before the Raiders touched it again.

With Oakland playing a form of Cover 2 with matchup principles, Rodgers started left, eyeing Geronimo Allison’s seam route and Jimmy Graham’s deep crosser. Graham broke across the face of linebacker Tahir Whitehead, who passed him off to deep safety Erik Harris. Having followed Rodgers’ eyes, Harris crept inside and jumped Graham as he came across.

But Harris abandoned his deep responsibility in the process. Expecting help over top, cornerback Daryl Worley rerouted Kumerow’s fade, let him go and then sunk underneath. Without Harris helping, Rodgers had an easy window over top.

With the Packers out of timeouts and just 20 seconds left in the half, that throw should never be open. The defense should be guarding the sideline and taking away deep throws.

But Rodgers processed the mistake immediately, manipulated Harris and ripped the Raiders’ hearts out.

Leading by five and facing second-and-6 with three minutes left, most coaches would run the ball. Certainly you’d expect that from Mike Zimmer, who fired his offensive coordinator last season for not running enough.

But Zimmer’s new play-caller, Kevin Stefanski, instead dialed up a deep shot in Detroit, and it paid off brilliantly to clinch the win. With all 11 Lions within 5 yards of the line of scrimmage, the Vikings used 13 personnel (one back, three tight ends, one wideout) and max protection while sending Stefon Diggs on post route.

As we covered last week, Diggs running a post against a cornerback (this time Justin Coleman) in outside leverage is lethal. Presnap motion ensured Coleman couldn’t press Diggs, so it quickly became a foot race.

Late in the game, you gotta… DIGGS DEEP! pic.twitter.com/ya7ag9D4mJ

The Vikings could have run on second down, likely leading to third-and-long and an obvious pass or draw situation. Instead, they punished the Lions’ aggressiveness with some of their own to slam the door in a key divisional win.

Power O with a twist

The Indianapolis Colts have become increasingly run-heavy since Andrew Luck retired, but head coach Frank Reich always maintains some creativity. The Colts’ final touchdown against the Houston Texans was a perfect example.

Reich featured his best lineman, left guard Quenton Nelson, pulling on a power design. But rather than a traditional run, he made it a power-read shovel, a concept that has proliferated in recent years.

With Cunningham a beat late identifying the play, Nelson had more than enough time to line him up. The 330-pounder added another pancake to his highlight reel, planting Cunningham violently on his back, and Pascal burrowed in for the score.

Peters plays to his reputation

Marcus Peters was traded to the Baltimore Ravens on Tuesday. Five days later, he fooled the league’s leading MVP candidate for a 67-yard pick-6, cashing in a critical touchdown amid the Ravens’ red zone struggles.

There was nothing disguised or nuanced about Baltimore’s coverage. They played Cover-1 blitz (man coverage with one safety deep and five rushers) and showed it presnap, with everyone in press position.

But Peters didn’t just play his man. He recognized the Seahawks’ route concept — Tyler Lockett on a slot fade, Jaron Brown on a one-step hitch — and sunk with Lockett, Marlon Humphrey’s man. Wilson started to throw to Lockett but pulled back. When he did, Peters immediately pivoted and flew back to Brown, easily picking off Wilson’s flat-footed throw.

Reading the quarterback in man coverage (and leaving your man) is often a cardinal sin, but that’s Peters’ style (which Baltimore knew when trading for him). The double-edged sword cut in the Ravens’ favor this time.

Wilson was surely kicking himself, not only because he was tricked by Peters, but because he missed a touchdown on a mirrored route concept to the other side. Rookie DK Metcalf burned Brandon Carr on a slot fade to the left, pulling multiple yards clear with his 4.33 speed and no safety to help.