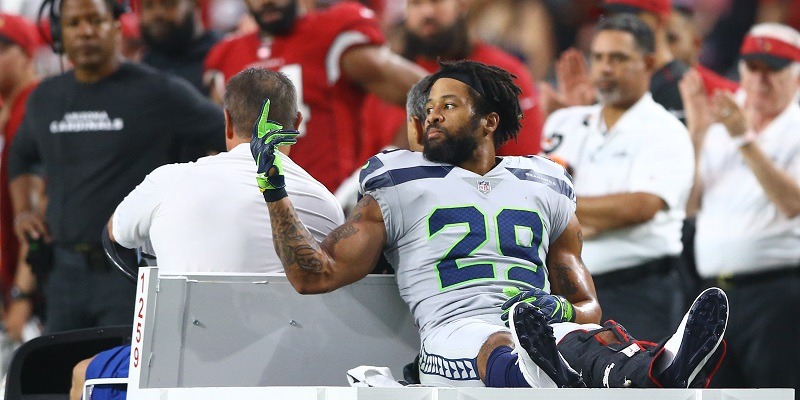 The last Seattle Seahawks fans saw of Earl Thomas, he was flipping out.

Or, to be more precise, flipping off coach Pete Carroll.

The longtime Seahawks standout will return to Seattle on Sunday with the Baltimore Ravens, the team the free safety signed with in the offseason.

In nine seasons in Seattle, Thomas was selected to the Pro Bowl six times. However, a contract dispute led him to hold out for all of training camp and the preseason in 2018. In Week 4 at Arizona, he broke his lower left leg and was carted off the field. While being taken off, he turned toward the Seahawks’ sideline and gave Carroll a single-digit salute.

“A lot of frustration that day,” Thomas told Peter King in the offseason. “I was in a battle with the team, and I chose to play, and I was betting on myself. So when (the injury) happened, it just added to my frustration. I did what I did, and I saw Pete Carroll, and I just was like, ‘You won. You won.’ Just a very disappointing day.”

In six games for the AFC North-leading Ravens (4-2), Thomas has 19 tackles, two passes defensed and an interception.

Ravens coach John Harbaugh was asked if he’d have a talk with Thomas before the player’s return to Seattle.

“No. I probably won’t,” Harbaugh said. “I wouldn’t presume to have a conversation about that. That’s something he’ll know how to handle. He knows what to do, how to handle himself.”

Carroll seemed to harbor no ill will.

“People that are criticizing whatever happened don’t understand that this is an earth-shattering moment (after an injury) for a kid,” Carroll said. “Give him a little slack. This is a very, very difficult moment that most people would never understand what it’s about.”

Thomas won’t be the only Ravens player making his return to Seattle. Former University of Washington cornerback Marcus Peters, acquired Tuesday in a trade with the Los Angeles Rams, is expected to play on Sunday “as much as he can,” according to Harbaugh.

“I think he’s a good fit for our defense, the way we play, the type of techniques we play back there,” Harbaugh said. “I’m just looking forward to getting him to work and getting him up to speed as quickly as possible and rolling.”

The Ravens are coming off a 23-17 victory against the Cincinnati Bengals in which Lamar Jackson passed for 236 yards and rushed for 152 more and a touchdown.

The Seahawks rallied from a 14-point deficit to win 32-28 at Cleveland last weekend.

“I’m not a fan of winning this way,” said Seahawks linebacker K.J. Wright, who had a game-sealing interception. “It got ugly there in the beginning. … It was an uphill battle the whole time, but it’s a long game.

Russell Wilson, who has 14 touchdown passes against zero interceptions this season, rallied the Seahawks by passing for two scores and rushing for another. Chris Carson added 124 yards and a touchdown on the ground, and the Seahawks had four takeaways.

Seattle leads the teams’ all-time series 3-2, having won each of the past three meetings, including a 35-6 blowout at Baltimore in December 2015.