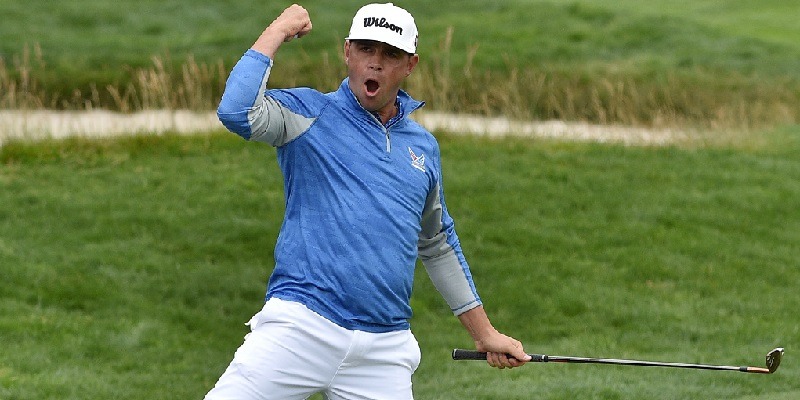 A string of five consecutive birdies led Gary Woodland to a three-shot lead at the midway point of the Sentry Tournament of Champions in Kapalua, Hawaii.
Woodland shot a second consecutive 6-under-par 67 Friday on the par-73 Plantation Course at Kapalua Resort, leaving him at 12-under 134 in the Maui tournament. Sitting in second in the year-opening event for 2017 winners are first-round leader Kevin Tway, Bryson DeChambeau and Northern Ireland’s Rory McIlroy, all at 9 under.
After an up-and-down front nine that featured two birdies and two bogeys, Woodland began his hot streak when he chipped in for birdie from just off the green on the par-3 11th hole. He followed with birdies on Nos. 12-15, and he capped his round with another birdie on the par-5 18th hole.
“It was frustrating early,” Woodland said. “The wind was really messing with me on the greens. I regrouped after missing a short one on nine, chipped in there (on 11) and got it rolling.”
For the day, Woodland had three birdies and a par on the four par-5 holes.

Tway, who opened with a 66 on Thursday, had a quiet round through his first 13 holes Friday: 12 pars and a birdie at the par-5 ninth hole. He added consecutive birdies at Nos. 14 and 15 before giving a stroke back at No. 17 en route to a 71.
McIlroy and DeChambeau both improved from 69 on Thursday to 68 on Friday. McIlroy’s second-round card included six birdies and one bogey while DeChambeau had a bogey-free round with five birdies.
McIlroy is making his debut in the PGA Tour’s Tournament of Champions.
For the second day in a row, Australia’s Marc Leishman sits alone in fifth place. He is at 8 under following a 70.
Xander Schauffele (second-round 67), Cameron Champ (68) and Justin Thomas (72) share sixth place at 7 under. Patton Kizzire (71), England’s Ian Poulter (69) and Australia’s Jason Day (71) are tied for ninth at 6 under.
Defending champion Dustin Johnson slipped from a tie for second to a tie for 12th at 4 under following a 74. His round was marred by a two-stroke penalty for playing the wrong ball.
Johnson hit his ball into a hazard area of native grass on the fourth hole, and a marshal incorrectly pointed him to the wrong ball. Before hitting his next shot, Johnson discovered the error and went back to play the correct ball. He finished with a double-bogey 6 on the par-4 hole.
“The marshal had it marked, said it went in the hazard right there and there was a ball right there and it was a TaylorMade,” Johnson said, according to golfchannel.com. “I just assumed it was mine. And it was way up in there, so I didn’t want to move anything. …
“That won’t ever happen again. I can promise you that. It’s just bad luck.”
–Field Level Media