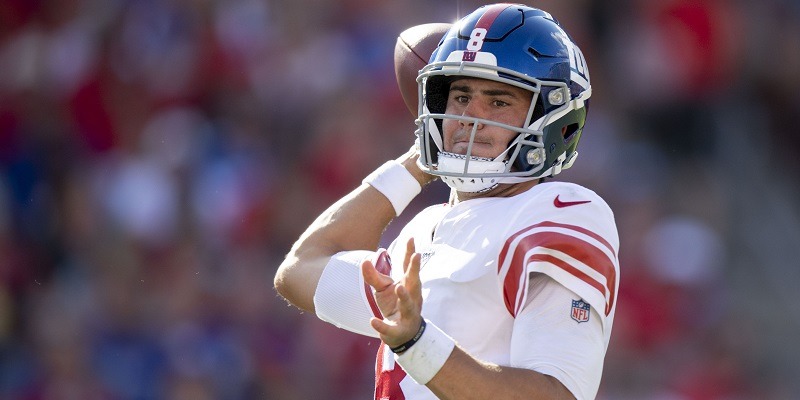 Daniel Jones’ stellar debut as an NFL starting quarterback provided optimism for throngs of skeptical New York Giants fans, and led to sportsbooks driving down his odds to win Offensive Rookie of the Year honors.

Jones threw for 336 yards, rushed for 28 more and accounted for four total touchdowns in a 32-31 come-from-behind victory over the Tampa Bay Buccaneers on Sunday.

The controversial No. 6 overall pick in the 2019 NFL Draft, Jones is now the favorite by DraftKings to take home OROY honors at +200. He leapfrogged Arizona Cardinals quarterback and No. 1 overall pick Kyle Murray (+350), with Baltimore Ravens wide receiver Marquise Brown at +600.

Jones was being offered at +1000 by DraftKings before making his first NFL start.

Another rising candidate is Jacksonville Jaguars sixth-round quarterback Gardner Minshew, who is being offered at +800 along with Oakland Raiders running back Josh Jacobs.

Murray leads all rookies and is 10th in the NFL with 830 passing yards. He has thrown four touchdowns against three interceptions and a 79.0 passer rating, but has yet to lead the Cardinals (0-2-1) to a victory.