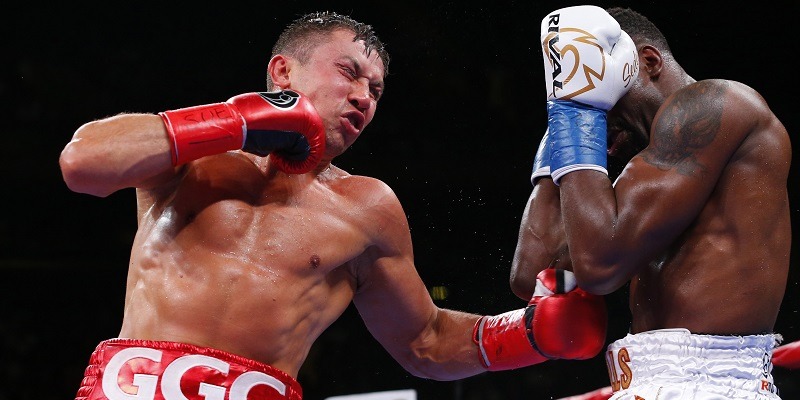 Gennadiy Golovkin has ruled over the middleweight division for the better part of the past decade.

Sergiy Derevyanchenko will try to knock Golovkin off that perch on Saturday at Madison Square Garden in New York when the two meet for the vacant IBF world middleweight title.

Golovkin the former middleweight champion, takes a sparkling record of 39-1-1, with 35 knockouts into the fight. Despite being 37-years old, he remains one of the top pound-for-pound fighters in the world and one of the sport’s biggest and most popular draws.

Derevyanchenko is four years younger than Golovkin with much less professional experience than his opponent. The Ukraine native, known as “The Technician”, carries a 13-1 record with 10 KOs. His only loss came on a split decision at the hands of Daniel Jacobs in an Oct. 27, 2018, fight for the same title at stake on Saturday.

The two fighters will enter the ring on Saturday with plenty of well-deserved respect for each other.

“This is a great time for me and a great time for boxing right now,” Golovkin said at Wednesday’s news conference. “I want to speak like a fighter, like a boxer: I’m ready. I’m so excited. We had a lot of time for great prep for this event.

“Please, guys, if you like real fight, don’t miss this fight. I see you Saturday night. Thank you so much.”

It’s that kind of talk that has endeared the Kazakhstan native to boxing fans around the world, but especially in New York at MSG.

“I’m happy to be back home at Madison Square Garden,” Golovkin told reporters during a workout earlier in the week. “These are the best fans. They know what good boxing is all about. Me and Sergiy Derevyanchenko are going to give them a great gift with a great fight.”

Derevyanchenko also was gracious and through his interpreter said he was grateful for the opportunity to finally face Golovkin.

There were as many twists and turns as a roller coaster at Coney Island just to make Saturday’s fight happen.

Canelo Alvarez vacated the belt for not scheduling to fight the mandatory challenger — Derevyanchenko — instead opting to oppose light heavyweight champion Sergiy Kovalev next month.

Golovkin held the title for three years before Alvarez, but was stripped of the belt in May 2018 for not fighting — Derevyanchenko — after a scheduled bout with rival Alvarez was called off.

In his most recent fight against Steve Rolls in September, Golovkin showed the power punching ability that at one time in his career resulted in 23 straight knockouts.

Yet there are still some who have questions about Golovkin’s skills and wonder if a steep decline is on the horizon. After winning his first 37 fights, he and Canelo fought to a draw. After dispatching Vanes Martirosyan, Golovkin suffered his first loss, a majority decision, in his second fight against Alvarez.

Golovkin bounced back with that fourth-round knockout of Rolls. New trainer Johnathan Banks, who previously trained Wladimir Klitschko and who trains undisputed welterweight champ Cecilia Braekhus, is getting a lot of pre-fight credit for helping Golovkin stave off Father Time and prepare for what’s ahead this weekend.

Golovkin has put the time in the gym and badlefthook.com reported someone close to the Golovkin camp said Banks is thrilled with how his fighter has been “gliding” around the ring in practice.

“Banks hasn’t been teaching him new things, he’s been reminding him of the things he used to do,” the source indicated to badlefthook.com. “I don’t think this goes to decision.”

And while Golovkin has slight height and reach advantages, Derevyanchenko might have a not-so-secret weapon in his corner with Andre Rozier. The veteran trainer has been in the corner twice with fighters trying to stop Golovkin.

Both times he’s come up short, but if anyone other than Alvarez knows what it will take to walk out of the ring with title belt against Golovkin, it’s Rozier.

“If the best version of my guy shows up, he wins,” Rozier said, according to badlefthook.com. “Sergiy is winning on Saturday night.”

Rozier said his fighter is ready to pull off the upset and take his place among the great middleweights.

“Sergiy has prepared for the best GGG he could possibly face,” Rozier told BoxingNews24. “You hear people say it often, but this has been one of the best training camps ever. It speaks to the person that Sergiy is. He’s a hard-working fighter, he’s a quiet soul, and he’s just an enjoyable person to be around.

“I would pray that any trainer could have a fighter of his caliber and his character to work with because it’s been fantastic. It really has.”

Without revealing his game plan, Rozier said the key to beating Golovkin, or any fighter, is to understand the opponent’s strengths. In Golovkin’s case, it is his ability to throw combinations in sets of three.

“It’s one, two, hook or one, two, down. And you just have to make sure that you’re not there receiving those three and keep him off balance,” Rozier told BoxingNews 24. “He has a great jab, but so does Sergiy. Just because he does have a great jab doesn’t mean that you don’t try to hold space and control the action just as he does. And after that, just keep working and keep scoring.”

Golovkin and Derevyanchenko have similar styles and have faced one common opponent — Jacobs. While Derevyanchenko lost a close decision, Golovkin went 12 rounds (for the first time in his career) to unify the WBA, WBC, IBF and IBO belts with a unanimous decision victory in March 2017.

Many who witnessed Derevyanchenko get edged out in that back-and-forth battle against Jacobs, believe he won. That gives “The Technician” plenty of hope heading into MSG on Saturday.

A confident Derevyanchenko remained upbeat despite being such a heavy underdog.

And on being a heavy underdog?

The fight can be seen on DAZN streaming service.