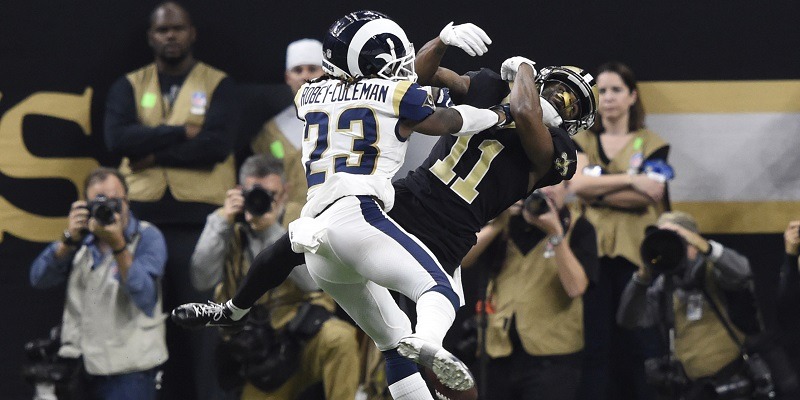 ATLANTA – Ten days after the controversial end of the NFC Championship Game, NFL commissioner Roger Goodell said Wednesday that while he understands the frustration of the New Orleans Saints and their fans that it “was not a consideration” to overturn the result.
The Saints lost 26-23 in overtime to the Los Angeles Rams after a pair of penalties were not called against Rams cornerback Nickell Robey-Coleman on a critical third down play late in regulation that would have enabled New Orleans to run most of the clock out before attempting a short game-winning field-goal attempt.
Goodell addressed the controversy for the first time during his annual pre-Super Bowl press conference, but said that he has spoken with Saints coach Sean Payton and his players in the days since the game.

“We understand the frustration of the fans,” Goodell said. “I’ve talked to Coach Payton, the team, the players. We understand the frustration that they feel right now, and we certainly want to address that.”
Goodell recited the rule regarding the commissioner’s power to impact games, and insisted it did not include changing results due to complaints from teams.
“Absolutely not, I think it’s clear,” Goodell said. “That was not a consideration.”
Goodell confirmed that NFL head of officiating Al Riveron called Payton following the game to admit a helmet-to-helmet hit in addition to a clear pass interference penalty against Robey-Coleman were missed by the officiating crew. Goodell also spoke to Saints owner Gayle Benson, while NFL vice president of football operations Troy Vincent also called Payton to communicate that an error was made.
Asked why it took him 10 days to address the controversy publicly, Goodell referred to the league’s process in such situations and that the necessary communication happened between the clubs and with the officials.
“Whenever officiating is a part of any conversation post-game, it’s never a good outcome for us,” he said. “But we also know our officials are human, and we know they’re officiating a game that moves quickly and they make snap decisions. And they’ re not going to get it right every time.
Goodell expects the competition committee to discuss the issue at length during the offseason. He doesn’t believe adding an eighth official will solve the problem “in and of itself,” and cautioned that any expansion of instant replay to include judgement calls by officials has to be evaluated significantly to ensure unintended consequences don’t arise.
As an example, Goodell said expanding replay to include judgement calls could lead to multiple fouls being found on a given play after the fact. He also said there has been strong resistance in the past to implementing fouls after the fact on a play on which there was not a flag thrown initially.
“Our coaches and clubs have been very resistant, and there has not been support to date, to have a replay office or someone in New York to throw a flag when there is no call,” Goodell said. “There has been an opposition philosophically from a lot of clubs.
“My role is to make sure the competition committee understands that this is critical for us to analyze to see if there is a better solution than what we have today. We try to get better, we try to learn and I think that has been effective.”
Asked if Super Bowl LII is “tainted” with the Rams taking part after winning a game that most believe would have gone the Saints’ way if not for the two blatantly missed calls, Goodell referred to the human nature of the game of football.
“Over our history, unfortunately we’ve had officiating errors that have been a lot of focus and news, but the game of football is played on the field,” he said. “They game is played by humans, coached by humans and officiated by humans.
“That’s what the game is. We’re proud that the Patriots and Rams are here, and we understand the frustration of Saints fans.”
–Derek Harper (@DerekAHarper), Field Level Media