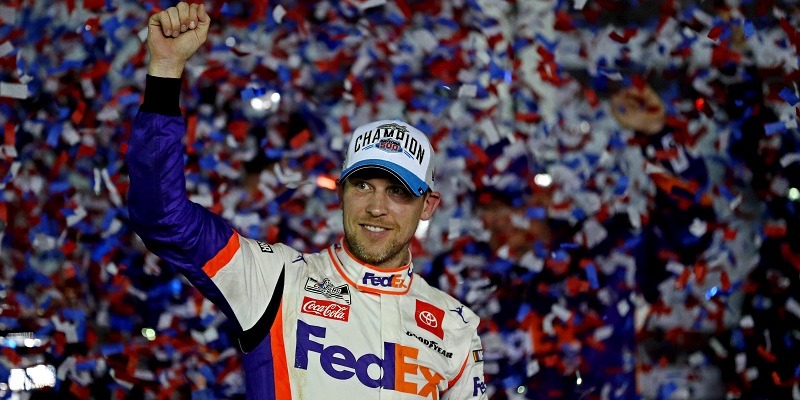 Last week, Denny Hamlin couldn’t come up with the names of drivers who have won three Daytona 500s. He did know that winning three would put him in “very, very elite” company.

Thanks to rain on Sunday, it took two days to get it, but on Monday, the Joe Gibbs Racing driver won NASCAR’s most important event for a third time.

“I don’t even know what to say. So unexpected,” Hamlin said.

The elation was diminished, however, due to initial uncertainty about the condition of Ryan Newman, who was injured in a final-lap wreck. Newman was taken from his car, which had flipped over and burst into flames, to Halifax Health Medical Center in Daytona Beach. His team, Roush Fenway Racing, announced more than two hours after the race ended that Newman was in serious condition with non-life-threatening injuries.

The statement added, “We appreciate your thoughts and prayers and ask that you respect the privacy of Ryan and his family during this time. We appreciate your patience and cooperation and we will provide more information as it becomes available.”

Joe Gibbs, Hamlin’s car owner, apologized that his team celebrated as it did at the race’s end, saying they did not know the severity of Newman’s wreck until they were told later.

Hamlin now has 38 Cup victories in 507 starts, and perhaps a foot in the door at the NASCAR Hall of Fame.

Asked to explain his success in the 500, he said, “I just feel like I’m a student to the game. I never stop learning and trying to figure out where I need to put myself at the right time. It doesn’t always work.

“The odds — we’ve definitely defied odds the last eight years or so to win the Daytona 500. I just trust my instincts and so far they’ve been good for me. I can’t do it without the car and making it capable for me to make those winning moves.”

Hamlin had to get through a final 30 laps that featured several huge wrecks on the high banks of the 2.5-mile track, the next-of-last of which sent the event into double overtime.

Rounding out the top five were David Ragan of Rick Ware Racing and Kevin Harvick of Stewart-Haas Racing.

Hamlin had the lead for the final, second-overtime restart. After the green flag dropped, he got a push from Blaney. A lap later, Blaney pushed Newman to the lead. As the field headed toward the finish line, Newman was bumped by Blaney and spun out. Hamlin snuck into the lead and took the checkered flag.

Newman’s Roush Fenway Ford was hit by Corey LaJoie’s Ford and flew in the air and landed on its top. The car caught fire and skidded across the finish line upside down.

“I was hoping he would kind of bounce off the fence to the left, but he didn’t and I hit him,” LaJoie said. “I don’t know exactly where I hit him. I haven’t seen a replay. It was some scary stuff. Don’t get me wrong, my car was on fire. My seat belts grabbed all sorts of areas, but it was a good day for us. I hope Ryan is OK.”

This is the craziest video of the Ryan Newman wreck. Prayers up pic.twitter.com/bBFkFu8cKm

Blaney explained the final lap, saying, “We pushed Newman there to the lead and then we got a push from the 11 (Hamlin). I kind of went low and he blocked that, and so I was committed to pushing him to the win and have a Ford win it. I don’t know. We just got the bumpers hooked up wrong and I turned him.

“I hope he is all right. It looked pretty bad. I was trying to push him to the win. I don’t like saying that things just happen because I feel really bad about it. It was a close one. I just hope Ryan is all right.”

The race proceeded calmly until there were just 19 laps to go. That’s when a big wreck took a number of top competitors out of the race. The wreck occurred when Joey Logano, whose aggressive driving has caused several controversial incidents in recent years, pushed Aric Almirola into the rear end of Brad Keselowski, who is Logano’s Team Penske teammate.

The wreck brought out the red flag for a lengthy cleanup.

Among those who had shots at victory erased by the wreck were Keselowski, Almirola, Martin Truex Jr., Kurt Busch, Alex Bowman, Austin Dillon, Ty Dillon, Blaney and Jimmie Johnson.

Seven-time Cup champion and two-time 500 winner Johnson, 44, drove well in what could be his final race at Daytona. He had a fast car all day and had the lead for a number of laps late in the race, but he wound up in 35th place.

Kyle Busch, a two-time Cup champion whose only resume hole is the lack of a 500 victory, was leading just prior to the big wreck but saw his day ruined by a blown engine.

“Sucks to be in that conversation,” Busch said of being a multi-time champ who has not won the big one.

The race started on Sunday, but a series of rain storms forced postponement to Monday after 20 laps had been run.