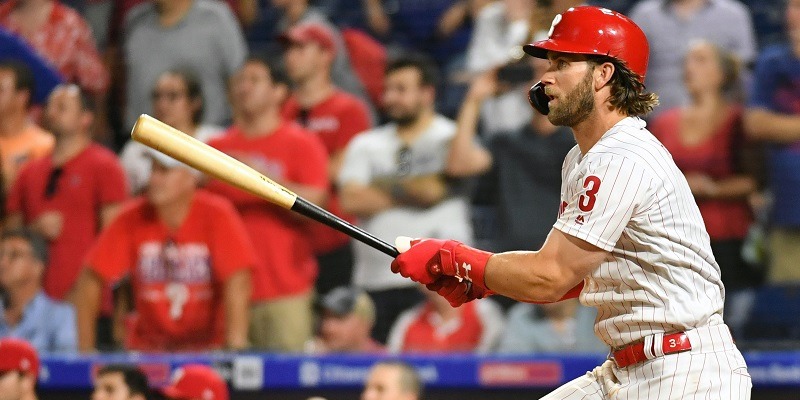 Bryce Harper is keeping a line in the water hoping to reel in Mike Trout to the Phillies in 2020.
The newly minted $330 million slugger said he will no doubt be pitching other players to join him in Philadelphia, including the native Trout — from nearby Millville, New Jersey — who can become a free agent in 2020.
“If you don’t think I’m not gonna call Mike Trout in 2020 to have him come to Philly, you’re crazy,” Harper said on 94.1 WIP radio in Philadelphia from Clearwater, Fla., on Tuesday.

Harper said being a recruiter or pitchman alongside Phillies owner John Middleton has been his intention since negotiations on a long-term deal began with a meeting in Las Vegas.
“For me, I can be able to talk to Trout, or whoever it is, big-name free agent or whoever wants to come to Philly … I can say, ‘Hey, this is the place to be. This is where the fans are great, ownership understands it, our manager is awesome,'” Harper said in the WIP interview.
“If you don’t want to come to Philly, then don’t come. Don’t be part of it. But if you want to come and be part of a winning team and a winning culture, then we are going to need the best players to do that. I don’t think John [Middleton] is scared to go out and get the best guys we need to have.”
Harper made a less overt pitch to the 27-year-old Trout, a lifelong Eagles fan and two-time American League MVP, on Saturday during his introductory press conference.
“I’m making $26 [million] a year. That’s going to be able to bring some other guys in as well to build up this organization,” Harper said. “There’s another guy in about two years that comes off the books. We’ll see what happens with that.”
ESPN reported MLB has already contacted the Phillies, citing the violation of Rule 3(k): “To preserve discipline and competition, and to prevent the enticement of players, coaches, managers and umpires, there shall be no negotiations or dealings respecting employment, either present or prospective, between any player, coach or manager and any Major or Minor League Club other than the Club with which the player is under contract.”

During spring training last March, Major League Baseball reprimanded Yankees slugger Aaron Judge for similar comments related to the impending free agency of Manny Machado. Machado was still under contract with the budget-minded Baltimore Orioles, a division rival of the Yankees.
“I told him he’d look pretty good in pinstripes,” Judge told reporters on March 15, 2018.
General manager Brian Cashman later gave Judge a call to discuss it, and MLB soon followed with a stern warning about players outwardly recruiting other players under contract.
“We have been in contact with the Yankees. They communicated to us that Mr. Judge’s off the cuff comments were not appropriate and not authorized by the club,” the league said in its statement last year. “They will speak to him to make sure that this does not happen again.”