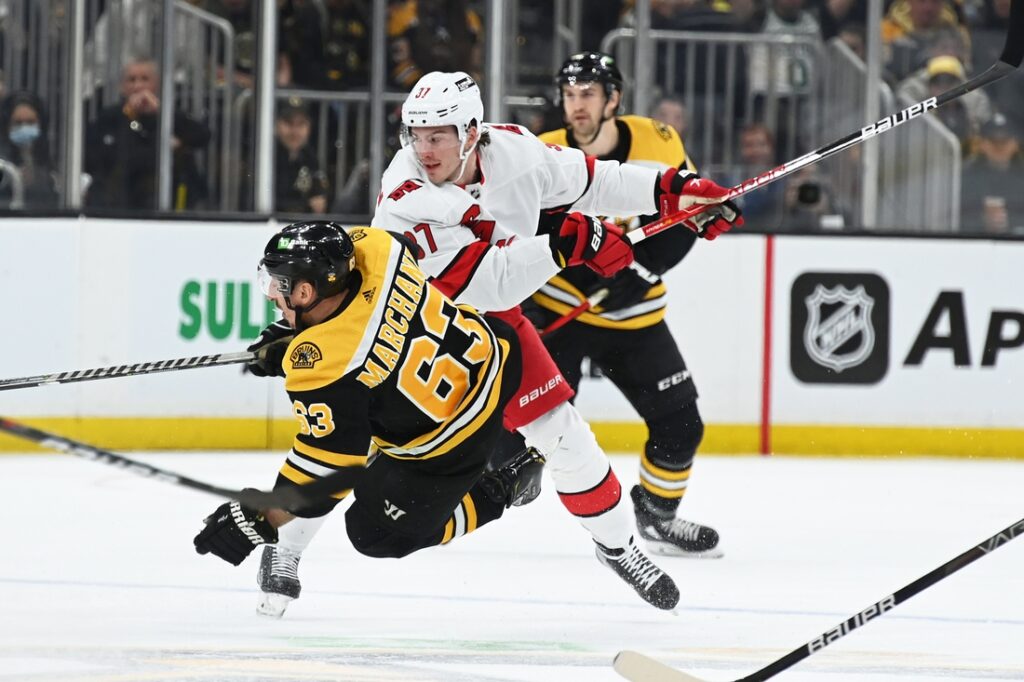 BOSTON — Brad Marchand scored a pair of third-period goals and had three assists as the Boston Bruins earned a 5-2 win over the Carolina Hurricanes to even their Eastern Conference first-round playoff series at two games each on Sunday afternoon.

Boston began the third period on a 36-second 5-on-3 and capitalized as Sebastian Aho’s double-minor for high-sticking continued. At the 44-second mark, Marchand buried the go-ahead goal from the left circle following Charlie Coyle’s feed.

Patrice Bergeron finished with a goal and two assists. Jake DeBrusk and David Pastrnak each logged a goal and an assist, and Coyle added two helpers.

Game 5 of the best-of-seven series will be Tuesday in Raleigh, N.C.

After Marchand netted the winner, Bergeron’s faceoff win set up a Pastrnak tally at 5:41. Off the draw, Marchand fed his fellow winger, who was open at the top of Antti Raanta’s crease.

Marchand finished his five-point game on an empty-netter with 34.4 seconds left.

Jordan Staal had a goal and an assist for Carolina. Brett Pesce also scored.

In his return from a Game 2 injury, Raanta made 23 saves.

Carolina was dominant through most of the first period, though it didn’t convert on two power-play opportunities. The visitors got on the board just after Boston completed its second penalty kill as Pesce scored in the slot, putting home Staal’s feed on the rush at 14:06.

The Canes held a 10-3 shot advantage when they took the lead.

Boston responded 2:03 later as Bergeron buried his third goal of the series. After Pastrnak centered the puck off the side of the goal, the Bruins’ captain was quick to tuck it past Raanta at the right post.

It didn’t take long — just 33 seconds — in the second period for Carolina to break the 1-1 tie. Staal crashed toward the net and nailed Nino Niederreiter’s backhand centering feed from the bottom of the left circle.

DeBrusk buried a loose puck in the blue paint to knot the score at 2-2 with 1:16 left in the second. To set it up, Marchand threw the puck toward the crease from behind the goal line.