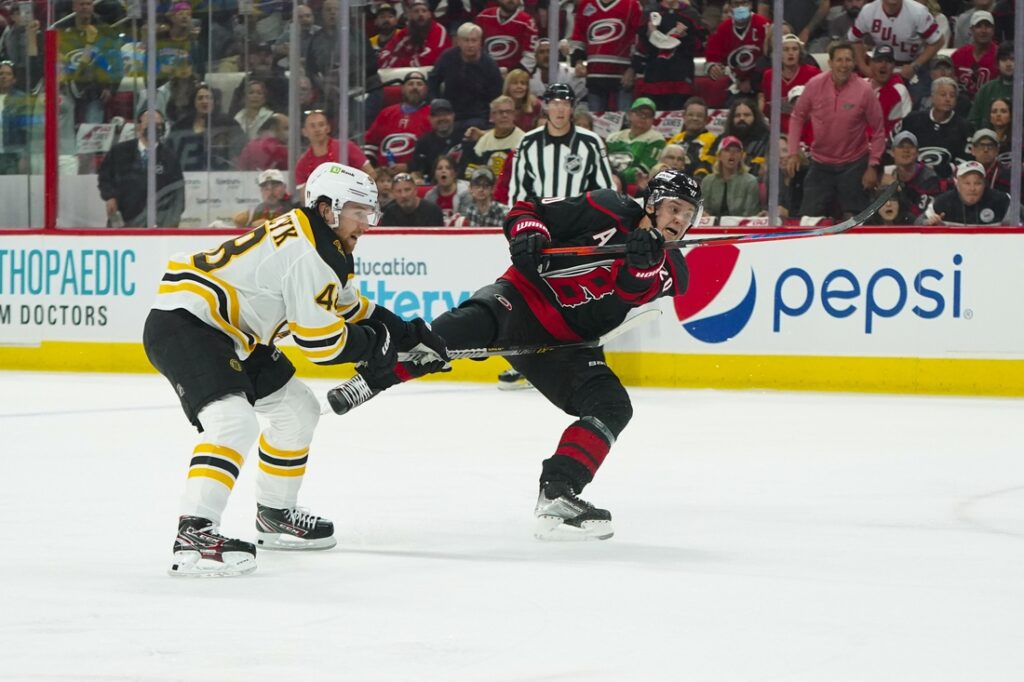 Vincent Trocheck and rookie Seth Jarvis each collected a goal and an assist to lift the host Carolina Hurricanes to a 5-1 victory over the Boston Bruins in Game 1 of their Eastern Conference first-round series on Monday in Raleigh, N.C.

Nino Niederreiter, Teuvo Teravainen and Andrei Svechnikov also scored for Carolina, which has outscored Boston by a 21-2 margin in four meetings in 2021-22 (three in the regular season, one in the playoffs).

Antti Raanta finished with 35 saves while making his first career playoff start in place of Frederik Andersen, who missed the Hurricanes’ final six games of the regular season with a lower-body injury. Andersen turned aside 98 of 99 shots and recorded two shutouts against Boston this season.

Taylor Hall scored early in the third period for the Bruins, who will look to rebound on Wednesday in Game 2 of the best-of-seven series.

Carolina snapped a scoreless tie with a late flourish to conclude the second period.

Defenseman Jaccob Slavin’s shot from the point was deftly deflected home by Jarvis to open the scoring with 3:32 remaining in the second. Jarvis finished the regular season on a seven-game point streak (three goals, four assists).

Niederreiter doubled the advantage just 2:10 later, after his shot from above the left circle sailed over the glove of a screened Linus Ullmark (20 saves). Hurricanes captain Jordan Staal was stationed in front of Ullmark.

Hall answered by one-timing a feed from former Hurricane Erik Haula to halve the deficit at 2:53 of the third period.

Trocheck ignited a two-on-one rush before feeding Teravainen, who rifled a shot under the crossbar at 7:02 of the third period.

Trocheck provided the back-breaking goal with 3:01 left after his backhanded shot from below the goal line banked off the head of Ullmark and into the net. Svechnikov capped the scoring one minute later with an empty-net goal.