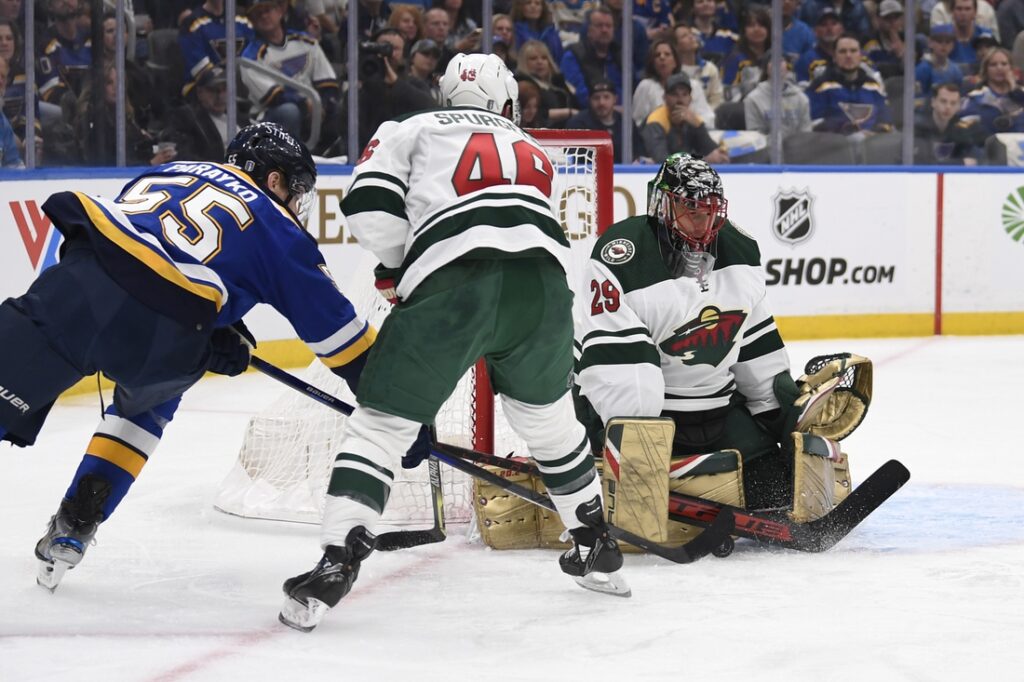 Kirill Kaprizov and Joel Eriksson Ek each had a goal and an assist as the visiting Minnesota Wild defeated the injury-depleted St. Louis Blues 5-1 on Friday to take a 2-1 lead in their first-round Western Conference playoff series.

The Blues won 4-0 in Game 1 of the best-of-seven series and Minnesota answered with a 6-2 victory in Game 2, with both contests in Saint Paul, Minn.

Goaltender Marc-Andre Fleury made 29 saves to earn 92nd career playoff victory, which tied him with Grant Fuhr for third place in NHL history.

Ryan O’Reilly scored for the Blues, and Ville Husso made 28 saves.

The already depleted Blues defensive corps took another hit when Torey Krug left the game in the first period with a lower-body injury sustained on his body check against Matt Boldy.

The Blues got defenseman Marco Scandella back from his lower-body injury in Game 3, but they were missing Robert Bortuzzo and Nick Leddy because of upper-body injuries.

After the Blues applied immediate pressure on their first shift, the Wild countered with a two-on-one rush that Greenway converted off Eriksson Ek’s cross-ice pass 39 seconds into the game.

Following another St. Louis offensive flurry, Kaprizov set off on a breakaway. He fanned on his shot, but he retrieved the puck and banked it off Husso’s skate from behind the net 2:18 into the game.

The Wild made it 3-0 with another two-on-one break in the second period, this time with Zuccarello moving in from the right wing to score from point-blank range.

Eriksson Ek upped the lead to 4-0 just 22 seconds into the third period by converting a centering pass from Foligno in the slot.

O’Reilly countered with a power-play goal from the right circle less than 2 minutes later to cut the deficit to three.