Wild have line on commanding series lead vs. Blues 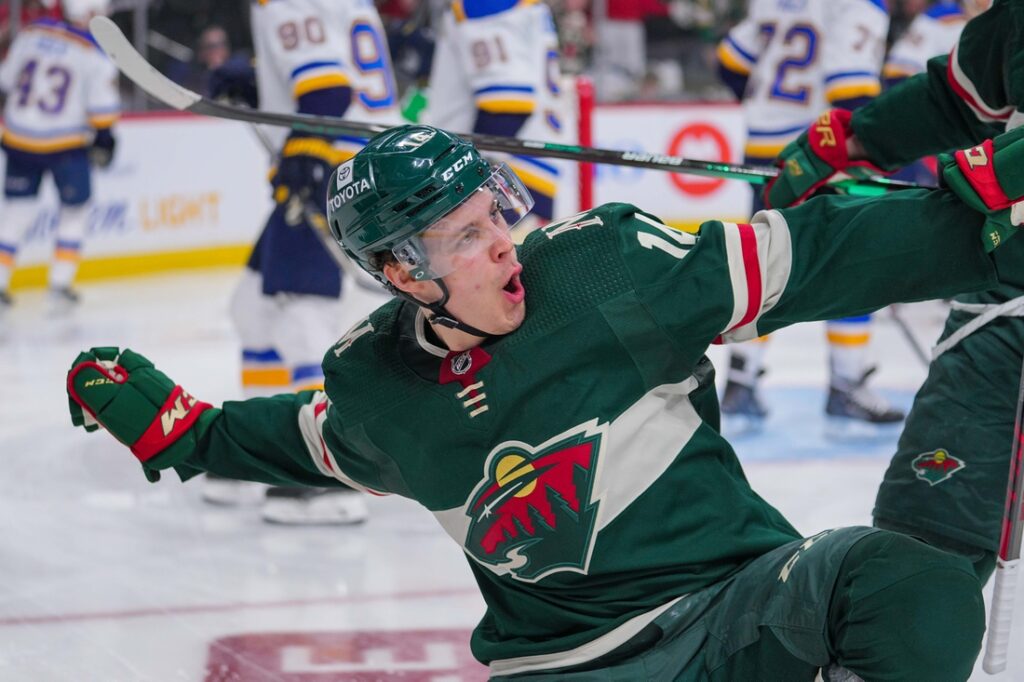 The Minnesota Wild hope to give the injury-depleted St. Louis Blues further grief and do it with their “GREEF line” Sunday in Game 4 of their first-round Western Conference playoff series in St. Louis.

The bulldozing forward line of Jordan Greenway, Joel Eriksson Ek and Marcus Foligno has spelled trouble for the Blues and has led the Wild to a 2-1 advantage in the best-of-seven series.

“We take a lot of pride in going out there and doing whatever we need to do,” Greenway said. “We usually played against the other team’s top line. Not only to go out there and not allow them to score 5-on-5 but to go out and get a couple of goals is obviously a bonus. At the same time, we go there and expect to do that. We set high standards for ourselves.”

Eriksson Ek had two goals and an assist in the Wild’s 6-2 victory in Game 2 to square the series in Minneapolis. Friday in Game 3 in the Blues’ building, Greenway scored 39 seconds into the game, Ek had a goal and an assist, and Foligno had two assists as Minnesota rolled to a 5-1 victory.

“It’s big to go out and not allow them to get momentum from their crowd and being in their own arena,” Greenway said. “I don’t think I came out planning on scoring as quick as we did. But we definitely wanted to go out there and attack them as much as we can. And we did.”

The GREEF line sets an aggressive forechecking tempo for the Wild, who figure to have their opportunities against the depleted Blues defensive corps.

The Blues got defenseman Marco Scandella back from his lower-body injury in Game 3, but they played without Robert Bortuzzo, Nick Leddy and Scott Perunovich due to upper-body injuries.

Then defenseman Torey Krug left Game 3 in the first period with a lower-body injury following a big body check against Matt Boldy.

“Yeah, (Krug is) a huge part of our back end and our power play, just the poise he has, the decision making, just how creative he is,” Blues captain Ryan O’Reilly said. “It’s tough. He goes down and we lose that part, but we are deep and we have to find a way.

“We have a lot of skill guys out there. We have to find a way to generate more and take control of the power play. It’s another bad bounce losing him, but yeah, we’ll reset, and we’ll adjust and be ready to go for the next one.”

Perunovich was on the ice during Saturday’s practice, while both Leddy and Bortuzzo skated after practice. But Steven Santini, a recent recall from Springfield of the AHL, could be in line to replace Krug, who produced 43 points in 64 regular-season games and had three assists in the Blues’ 4-0 Game 1 victory.

Santini could pair with another depth defenseman, Calle Rosen, in the third group. Niko Mikkola, who was a healthy scratch during the stretch run of the regular season, could be injected into a top four role.

“We’ll get the guys regrouped and go play,” Blues coach Craig Berube said. “It is what it is with the D-corps. They’re banged up back there, but we’ve got to be simple back there, we’ve got to move the puck as quickly as we can and our forwards have to do a lot more than they’re doing right now. That’s the bottom line. They’re not doing enough.”