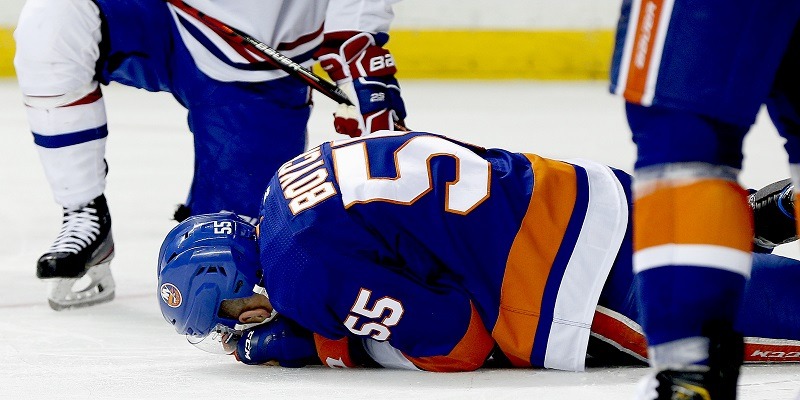 New York Islanders defenseman Johnny Boychuk is expected to make a full recovery after receiving a skate near his eye during Tuesday’s game against the Montreal Canadiens.

Islanders general manager Lou Lamoriello told reporters Wednesday that Boychuk required 90 stitches to close the wound after he was struck just above the eyelid.

“Johnny Boychuk is OK. There is no damage to his eye,” Lamoriello said. “… Fortunately (the skate blade) just got the eyelid. It took 90 stitches to fix. A plastic surgeon took care of it. … But he’ll be fine.”

Boychuk Injury Update from Lou Lamoriello: “Johnny Boychuk is ok. Fortunately the skate blade just got the eyelid. It took 90 stitches for a plastic surgeon to fix. But he’ll be fine.” #Isles pic.twitter.com/vYfsx9MAYO

Boychuk was checking Montreal forward Artturi Lehkonen from behind while both were in front of the Islanders’ net in the third period on Tuesday. Lehkonen fell forward and the heel of his right skate blade hit Boychuk, who was bent over slightly.

Boychuk immediately fell to the ice and clutched at his face in obvious pain. After a moment, Boychuk quickly got up, skated off the ice and headed straight to the locker room with medical personnel.

“Your heart kind of stops. It’s a dangerous game at times. Your mind is on him the rest of that night. It was great to hear after the game that he was doing better and it’s not nearly as serious as it looked. Regardless it’s a scary situation.” – Anders Lee on Johnny Boychuk pic.twitter.com/N8XFxTIkur

“My skate hit him in the face,” Lehkonen told reporters afterward. “I really hope it didn’t hit him in the eye or anything like that. But it was scary for sure. I felt it right away, that it hit somewhere high. So I just turned around, and I didn’t know really what to do.”

Boychuk, 36, has two goals and nine assists in 64 games this season.

Boychuk has spent the last six years with the Islanders after playing the previous six with the Boston Bruins. He has 54 goals and 152 assists in 725 career games with the Colorado Avalanche, Bruins and Islanders.

“You never want to see that happen to anyone. We were all really worried about him. After the game he sent a nice text to all of us. Definitely happy to see him doing well.” – Josh Bailey on Johnny Boychuk pic.twitter.com/m7sdmYOSQZ