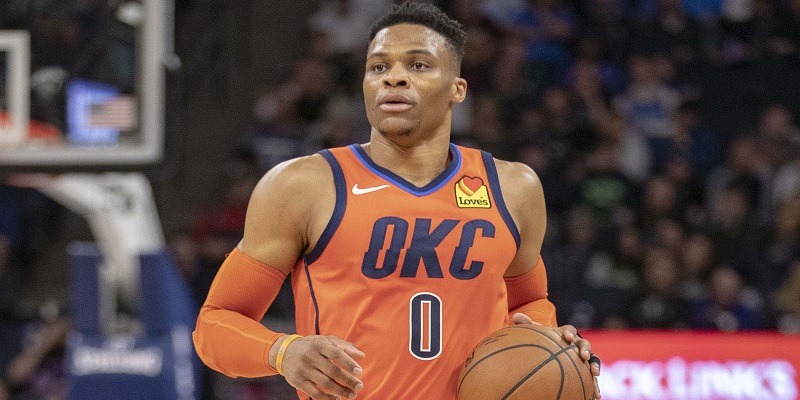 The Utah Jazz announced Tuesday that they have permanently banned a fan who engaged in “inappropriate interaction” with Oklahoma City Thunder guard Russell Westbrook during Monday’s game at Vivint Smart Home Arena in Salt Lake City.
Shane Keisel, who publicly revealed he was the fan involved, will not be allowed to attend any events at the arena.
Westbrook said after the contest that he was the victim of a disrespectful comment that he took as a racial barb. Westbrook was fined $25,000 on Tuesday by the NBA for “directing profanity and threatening language to a fan.”

The Jazz said they conducted an investigation through video and eyewitness accounts and Keisel’s ban is based on “excessive and derogatory verbal abuse directed at a player” that serves as a violation of the NBA Code of Conduct.
“Everyone deserves the opportunity to enjoy and play the game in a safe, positive and inclusive environment,” Jazz president Steve Starks said in a statement. “Offensive and abusive behavior does not reflect the values of the Miller (ownership) family, our organization and the community. We all have a responsibility to respect the game of basketball and, more importantly, each other as human beings. This has always been a hallmark of our incredible fan base and should forever be our standard moving forward.”
The statement also said that the Jazz “will not tolerate fans who act inappropriately. There is no place in our game for personal attacks or disrespect.”
The incident greatly disturbed star Utah guard Donovan Mitchell, who noted in a social media posting that the Westbrook incident isn’t the first time that home fans have crossed the line.
“I am personally hurt by the incident at the game on March 11th,” Mitchell wrote. “As a black man living in a community I love, and playing on a team that gives me the opportunity to live out my dreams, this incident hits close to home.
“Racism and hate speech hurts us all, and this is not the first time something like this has happened in our arena. The Utah that I have come to love is welcoming and inclusive and last night’s incident is not indicative of our fanbase. We don’t want to create a negative reputation for athletes who potentially may want to come to Utah.
“I want to thank my team and the NBA for quickly responding to this hateful incident, and for helping to make our arena a place where all fans and all players are welcome. I join other players in calling for all teams to take a stand. We should not be subject to hate speech or racist acts at any time, and definitely not in our arenas.”
The incident occurred during the second quarter of Oklahoma City’s 98-89 victory.
A reporter from the Deseret News tweeted a video of Westbrook’s comments to the fan.
“I promise you,” Westbrook said to the fan. “You think I’m playing. I swear to God. I swear to God. I’ll (expletive) you up; you and your wife. I’ll (expletive) you up.”
When another person appeared to intervene, Westbrook said, “No, (expletive) that! (Expletive) that!”
Then apparently addressing the fan again, he said, “I promise you, everything I love. Everything I love (n-word), I promise you.”
After the game, Westbrook gave his explanation: “How it started was, a young man and his wife in the stands told me ‘to get down on my knees like you used to.’ To me, that’s just completely disrespectful, to me, I think it’s racial, and I think it’s inappropriate and insensitive. …
“If I had it to do over again, I would say the exact same thing. I truly will stand up for myself and my family. …
“As for beating up his wife, I’ve never put my hand on a woman. I never will. Never been in any domestic violence before. But once he said the comment, and his wife repeated the same thing as well. That’s kind of how that started.”
Salt Lake City NBC 5 spoke with Keisel, who said he was playfully bantering with Westbrook before Westbrook started cursing at him.
“I never said a single swear word to him, not one,” Keisel told the TV station. “Initially, I was like, ‘Oh, I’m talking with Westbrook, the guy is one of the greats. He’s also classless.’ …
“He can threaten me all he wants. I was the one talking to him, but don’t threaten a woman. She’s 5 feet tall and 110 pounds, man. (She) never said a word to him.”
Keisel appears to have set his social media accounts to private, and deleted a series of insensitive posts on social media, including instructing Westbrook in October 2018 to “go back where he came from #MAGA.”
Last season, Westbrook knocked the cellphone out of the hand of a fan in Salt Lake City after a Thunder playoff loss.