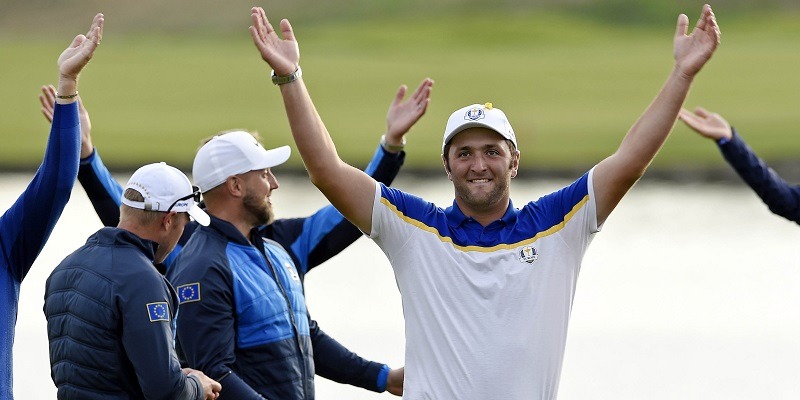 Spain’s Jon Rahm became the latest marquee player to call for the Ryder Cup to be postponed, saying the event is not “worth playing” if fans can’t attend.

The 2020 Ryder Cup is scheduled to be played at Whistling Straits in Wisconsin from Sept. 25-27. Due to the coronavirus pandemic, officials are evaluating whether it should be played without fans in attendance.

While European team captain Padraig Harrington said this week that the Ryder Cup might have to “take one for the team” and be played without fans, the second-ranked Rahm joined No. 1 Rory McIlroy and No. 3 Brooks Koepka in saying the team event loses its luster without the fans.

“It’s the one tournament of the year where we’re not playing for ourselves, we’re playing for Europe, we’re playing for the United States, and it’s for the fans,” Rahm told Sky Sports. “There are 50,000 people following four groups over the first two days and the atmosphere is what it is because of the fans.”

Rahm, 25, was a rookie on the 2018 European team that upset the United States in Paris, and he beat Tiger Woods in a memorable Sunday singles match. He said the lack of fans also would be a disservice to the U.S. team, with the home crowd playing such an important role.

“If they’re not there, it’s just 24 guys playing golf over a weekend with people watching at home,” Rahm told Sky Sports. “It just wouldn’t be the same thing. And it wouldn’t be fair for the U.S. team either if they don’t have the home support, which is always a big factor. The Ryder Cup in Paris would not be the same without the atmosphere we had.”

PGA of America CEO Seth Waugh has said the Ryder Cup may take place without fans and Harrington said this week that while playing without fans might not be in the best interest of the event, it might serve the greater good of the sport.

Three of the four annual majors have been rescheduled and The Open Championship was canceled. The current plan calls for the PGA Tour to resume in mid-June, with at least the first four events being contested without fans.

“It massively increases the odds of being with fans because by September we may have moved on. I assume there’s no chance of a vaccine (by September) so we’re looking at how well contained it is by then and how treatable it is.”

Rahm has heard that discussion, but said, “for me, A Ryder Cup without the spectactors is just not a Ryder Cup,” echoing McIlroy’s comments earlier this month.

“If it was up to me, and I hope I’m not alone in this, I think they should just delay it and be able to get it done in 2021 with spectators,” Rahm said.