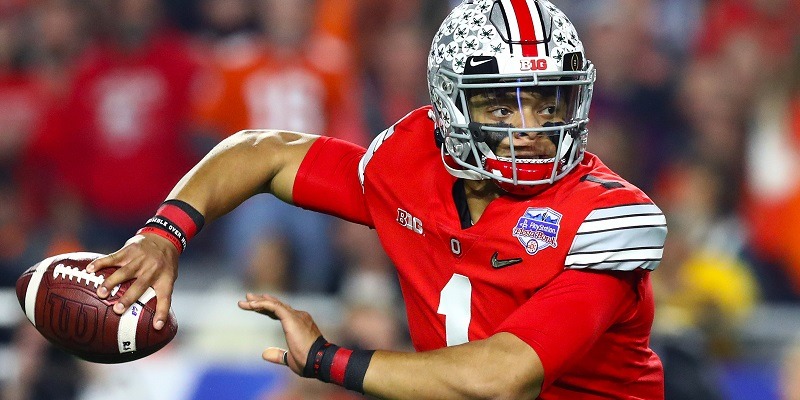 The Heisman race is back on.

The chase was made whole when the Big Ten opted back into a fall season, starting Oct. 24, which means Ohio State quarterback Justin Fields rejoins Clemson quarterback Trevor Lawrence as a betting co-favorite.

BETMGM lists both juniors at plus +260.

Nobody else in the field has their combination of proven skill and a team that can win it all. While the Heisman is the most coveted individual award in college football, recent history shows it almost always goes to a quarterback on a top 10 team (or an Alabama running back). That should inform some betting decisions.

Trevor Lawrence off to fast start

Lawrence was one of the early favorites last season but fell out of favor due to a slow start and a lack of competition in the ACC, which prevented him from posting any big-game “Heisman moments” to impress the voters. His 3,665 yards and 36 touchdowns did help the Tigers reach the national title game, where LSU and Heisman winner Joe Burrow stole the show to cap a 15-0 campaign.

Things are already breaking right for Lawrence this season. He’s 30 for 37 for 519 yards and four touchdowns, with no interceptions, in two games. And it will help that top-ranked Clemson’s schedule is tougher, with games looming against Miami and Notre Dame — and a closing two-step of Pitt and Virginia Tech are more potential matchups against ranked teams.

Fields finished third in the Heisman voting last season, when, in his first year in Columbus, he completed 67.2 percent of his passes for 3,273 yards. He posted a ridiculous touchdown-to-interception ratio of 41-to-3 and became the first QB in Big Ten history to have at least 40 passing touchdowns to go with 10 rushing scores.

The next tier of Heisman odds begins with Oklahoma quarterback Spencer Rattler at plus-700. He’s a redshirt freshman and former five-star recruit, but the key here is “Oklahoma quarterback.” Two of the past three Sooners signal-callers (Baker Mayfield, Kyler Murray) won the Heisman, while Jalen Hurts was second in 2019.

Some early betting love has come in on LSU wide receiver Racey McMath, who is fourth at BETMGM at +1000. Who is McMath? He’s a senior receiver at LSU, stepping into a much bigger role after Justin Jefferson was a first-round pick and Biletnikoff winner Ja’Marr Chase opted out of 2020.

QBs continue to lead the way

The odds get back on track after that, with lots of quarterbacks from top teams:

Texas senior Sam Ehlinger is +1100, followed by Miami senior D’Eriq King, Alabama junior Mac Jones, LSU junior Myles Brennan and Florida senior Kyle Trask, all at +2000. Also at +2000 are speedy Alabama wide receiver/returner Jaylen Waddle and Georgia quarterback JT Daniels. The latter is a transfer from USC who, as of Wednesday, had not been medically cleared with the Bulldogs due to his recovery from a 2019 knee injury.

Jones took over for injured Tua Tagovailoa late last season and did a nice job, although he projects more as a game manager in a loaded Crimson Tide offense. Bets can be hedged by opting for talented Alabama freshman quarterback Bryce Young at +2500.

“I’ve always believed in Myles Brennan,” LSU coach Ed Orgeron said this week. “I think he’s an excellent young man, he’s waited his turn, a lot of respect, has a strong arm — probably a stronger arm than Joe Burrow had — can extend plays with his feet, not quite like Joe did.”

King, a Houston transfer, has led Miami to a promising 2-0 start. He’s being compared to Russell Wilson in terms of size, moxie and ability to make plays with his arm and legs. Trask is the preseason pick of the SEC coaches to be first-team all-conference.

A trio of running backs land at +2500 — Clemson’s Travis Etienne, Alabama’s Najee Harris and Ohio State’s Trey Sermon, a transfer from Oklahoma. There might be value further down the board with a pair of promising sophomore quarterbacks at +3500 — North Carolina’s Sam Howell and Auburn’s Bo Nix. Both are returning starters who appear poised to make second-year leaps on teams that could challenge for the College Football Playoff.