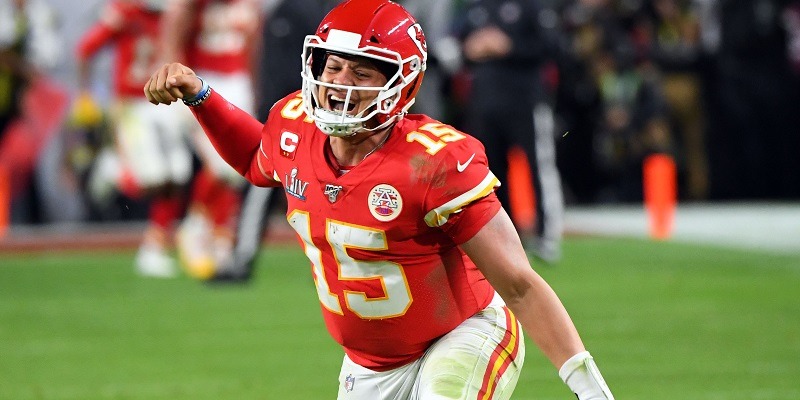 MIAMI GARDENS, Fla. — Running back Damien Williams scored two touchdowns, one by air and one by land, and Patrick Mahomes also threw a touchdown to tight end Travis Kelce in a three-touchdown fourth quarter that brought the Kansas City Chiefs back from a 20-10 deficit to defeat the San Francisco 49ers 31-20 in Super Bowl LIV on Sunday.

It was Kansas City’s first Super Bowl victory in 50 years.

Mahomes finished 26 of 42 for 286 yards and two touchdowns with two interceptions, while being named the game’s Most Valuable Player. He threw for 141 yards in the fourth quarter and became the second-youngest quarterback ever to win a Super Bowl (Ben Roethlisberger, Super Bowl XL).

“We never lost faith, I think that’s the biggest thing,” Mahomes said afterward on the Fox broadcast. “Everybody on this team, nobody had their heads down.”

Things looked bleak for the Chiefs when Mahomes was sacked twice and intercepted twice in the first 18 minutes of the second half, as the 49ers gained a 20-10 lead after the score was tied 10-10 at halftime.

However, the Chiefs — who rallied from deficits of 24-0 to Houston and 10-0 to Tennessee earlier this postseason — started their comeback on a 10-play, 83-yard drive. They pulled within 20-17 on a 1-yard touchdown pass from Mahomes to Kelce with 6:13 to play.

After a 16-yard apparent completion to receiver Tyreek Hill was reversed on replay, Mahomes connected with Hill on a 44-yard pass to the 49ers 21-yard line. The ball went to the 1 when safety Tarvarius Moore was flagged for interference on Kelce in the end zone. Moore had registered Mahomes’ second interception of the game that stopped a Kansas City drive that reached the 49ers 23-yard line.

However, the Chiefs forced the 49ers to punt after the interception, which led to the Kelce score.

The 49ers then had their first three-and-out of the game when linebacker Ben Niemann pressured 49ers quarterback Jimmy Garoppolo, forcing an incompletion on a third-and-5 play. Mahomes then engineered a seven-play, 65-yard scoring drive that featured a 38-yard completion to wide receiver Sammy Watkins to the San Francisco 10-yard line. They took a 24-20 lead on a 5-yard pass to Williams.

“It was Pat Mahomes and the defense taking care of business,” Chiefs head coach Andy Reid, who won his first Super Bowl in his 222nd career victory as a head coach, said afterward.

“Coach Reid told me after both of ’em to keep firing,” Mahomes added of his interceptions. “Keep believing and keep firing.”

After Garoppolo had four consecutive incompletions, the final one on fourth-and-10, Williams ran 38 yards for a touchdown for the final points of the game.

“We just didn’t get it done when we got the ball,” 49ers head coach Kyle Shanahan said afterward. “Came up just short on a couple plays. … When we had to answer, we didn’t.”

The Chiefs became the first team in NFL history to overcome three double-digit deficits in the postseason en route to a Super Bowl title.

With the score tied at 10 as the second half began, the 49ers took the kickoff and marched from their 16-yard line to the Kansas City 24 before settling for Robbie Gould’s second field goal of the game. His 42-yard kick gave San Francisco a 13-10 lead with 9:29 remaining in the third quarter.

The lead was built to 20-10 after Mahomes was intercepted for the first time in his five-game postseason career.

The pick came one play after 49ers defensive end Nick Bosa knocked the ball out of Mahomes’ hand on a second-and-5 play from the Kansas City 46-yard line. Mahomes recovered his own fumble, but the 7-yard loss produced a third-and-12 play, on which linebacker Fred Warner made the interception at his own 45-yard line.

Garoppolo, who completed 20 of 31 passes for 219 with one touchdown and two interceptions, completed three passes on the next drive for 52 yards and running back Raheem Mostert scored on a 1-yard run with 2:35 left in the quarter.

The 49ers took a 3-0 lead on their opening drive, but the Chiefs regained the lead on Mahomes’ 1-yard touchdown run in the final minute of the first quarter.

After a 31-yard field goal by Harrison Butker gave Kansas City a 10-3 lead, the 49ers responded with Garoppolo’s 15-yard pass to fullback Kyle Juszczyk, knotting the score at 10 with 5:05 left until halftime.