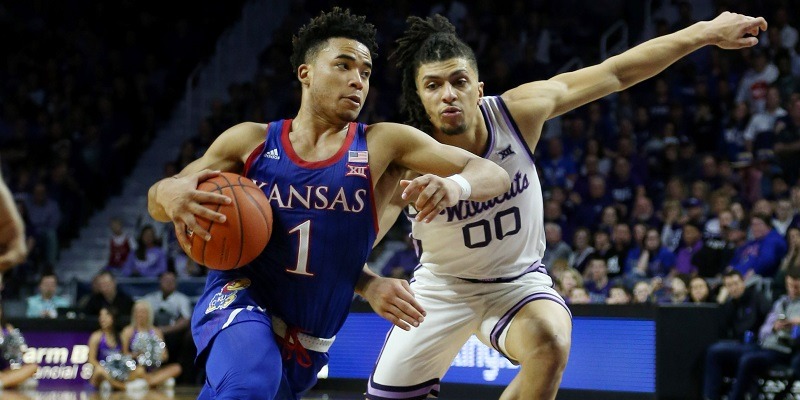 The NCAA Tournament tips off with the First Four in two weeks and bettors are beginning to hone in on the favorites after regular season chock full of marquee upsets.

Fueled by a 14-game winning streak, the Kansas Jayhawks have emerged as the favorite to cut down the nets at most sportsbooks.

Despite last Saturday’s loss to TCU, Baylor remains the second betting favorite at +800 at DraftKings and PlaySugarHouse.com. The Bears were +900 at DraftKings last week.

Bettors still haven’t fully jumped on the wagon of new No. 3 Dayton, with the Flyers +1500 at DraftKings. That’s longer odds than 12th-ranked Duke, which is +1200 at both books.

It remains difficult for the smaller programs to garner the confidence of bettors. Fifth-ranked San Diego State still has only one loss, but the Aztecs’ odds dropped from +2000 last week to +2200 this week – same as they are at DraftKings.

Despite being the overwhelming favorite to win it all, Kansas did see their odds to win the Big 12 conference lengthen to +125 at both books while Baylor’s moved to +225.

“It is interesting to see that all four top teams’ odds got longer after the past weekend,” said Mattias Stetz, the COO of Rust Street Interactive, which operates PlaySugarHouse.com and BetRivers.com. “It makes for a very interesting tournament and the odds makers believe it is getting more open.”

Traditional powerhouses breed additional confidence: No. 7 Kentucky is generating 7 percent of the handle at DraftKings, second-most to Kansas – followed by Baylor and No. 10 Louisville at six percent and No. 16 Michigan State garnering five percent along with top-five teams Gonzaga, Dayton and San Diego State.

Meanwhile, No. 8 Seton Hall has been responsible for less than one percent.

Bettors may not be gravitating to Dayton yet, but those who jumped on the Flyers at +50000 at DraftKings on opening night stand to receive monster payouts they can win the title. The story is similar at PointsBet, where Dayton opened at +25000.