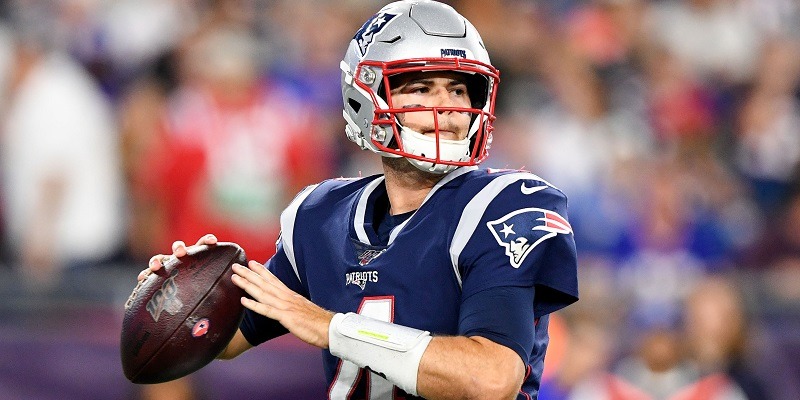 The New England Patriots are examining their options at quarterback in the wake of six-time Super Bowl champion Tom Brady’s departure to the Tampa Bay Buccaneers.

So who is going to “replace” Brady in New England after the three-time NFL MVP signed a two-year contract with the Buccaneers?

Well, Jarrett Stidham and journeyman Cody Kessler are the lone quarterbacks on the roster. Brian Hoyer, who was released by the Indianapolis Colts on Saturday, reportedly could be in line to return for a third stint with New England.

Stidham, who appears to be the first man up for coach Bill Belichick, was selected by the Patriots in the fourth round of the 2019 NFL Draft. The 23-year-old, in fact, became the 10th quarterback drafted by New England since the franchise selected Brady with the 199th pick in 2000.

Difficult day for @Patriots fans but they need to know BB stole Jarrett Stidham in 4th round. High-end natural arm talent. Comes off his hand so easy. Also bright and mature. Sources say he made huge strides in system last year. Talented enough to be Brady’s long-term successor. pic.twitter.com/s7Jp6ZOV5N

Stidham beat out Hoyer in the preseason last summer for the right to serve as the top backup in New England. The 6-foot-3, 215-pound QB completed 61 of 90 passes for 731 yards with four touchdowns and an interception during the preseason.

While Stidham received limited playing time in the regular season — completing 2 of 4 passes for 14 yards and an interception, his college coach provided insight on what the quarterback brings to the table.

“Just the way he approaches everything,” Auburn coach Gus Malzahn told Yahoo Sports on Saturday. “He’s obsessed. He’s obsessed with being the best. When it came to studying film, he was always up in the complex watching. You couldn’t chase him out of there. He was just trying to be the best. That’s the way he went about everything.”

Stidham was a two-year starter at Auburn after transferring from Baylor during the program’s sexual assault scandal. He passed for 36 touchdowns and 5,952 yards in 27 games with the Tigers.

Malzahn credited Stidham’s “mental toughness” and “quiet confidence,” two traits that likely will be tested should the second-year quarterback receive a starting role next season.

He can make every throw in the Patriots’ offense. Put the ball on receivers quickly in the short game, drove it downfield with accuracy, and launched rainbows to ideal spots pic.twitter.com/KbLESKxZHF

Kessler, who was a 2016 third-round pick from Southern California, appeared in 12 games (eight starts) for the Cleveland Browns across the 2016 and 2017 seasons. The Browns sent him to Jacksonville in March 2018 for a conditional seventh-round pick, and he made four starts in five appearances for the Jaguars.

Hoyer started his career with the Patriots as an undrafted free agent from Michigan State, then had stops with the Arizona Cardinals, Browns, Houston Texans, Chicago Bears and San Francisco 49ers before returning to the Patriots in 2017. The 34-year-old played in four games (one start) with the Colts last season and passed for 372 yards, four touchdowns and four interceptions.

For his career, Hoyer has completed 59.1 percent of his passes for 10,274 yards with 52 touchdowns and 34 interceptions.