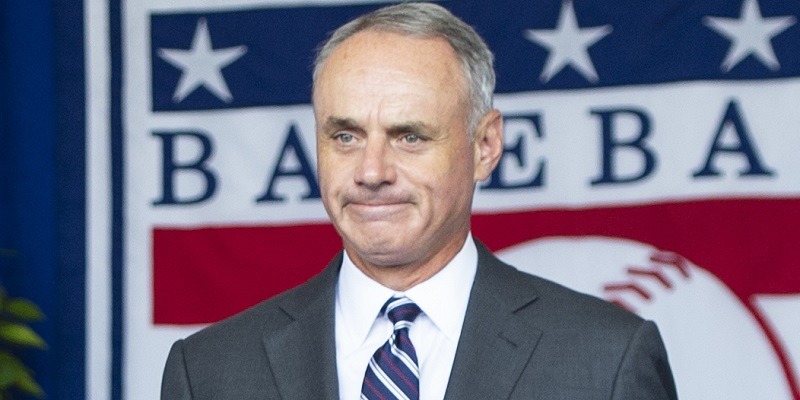 “I’m not confident (a season will be played),” Manfred said while speaking with ESPN’s Mike Greenberg on the network’s special featuring commissioners of multiple sports. “I think there’s real risk; and as long as there’s no dialogue, that real risk is gonna continue.”

Manfred blamed what he termed as the players union’s “decision to end good-faith negotiations” and the need for the sides to agree on health protocols.

“It’s just a disaster for our game, absolutely no question about it. It shouldn’t be happening, and it’s important that we find a way to get past it and get the game back on the field for the benefit of our fans.”

In addition, the Los Angeles Times reported that MLB sent a letter to the union on Monday, stating that the season would not be held unless the players waived all legal claims against management.

Source: In a letter today, MLB told the MLBPA there would be no 2020 season unless the players waived any legal claims against the league.

While all major U.S. sports leagues shut down in mid-March due to the coronavirus pandemic, MLB has experienced the most difficult (and public) debate over a restart plan.

Team owners and the MLB Players Association have gone back and forth exchanging plans for a partial season, with the major sticking point being the percentage of prorated salaries that players would receive.

The sides reached an agreement on March 26 over a plan for 2020, with the players guaranteed full prorated pay. However, the owners maintain that the deal was predicated on fans being in the stands for games, and with play now likely to commence in front of empty stadiums, a new deal must be reached to account for the vastly different economic landscape.

In recent weeks, MLB proposed various schedule lengths under which the players would receive different prorated pay percentages — the more games, the lower the percentage. The union has refused to move off its stance that it will only accept full prorated pay, adjusting its proposals by merely changing the number of proposed games.

On Saturday, the union announced it had rejected the owners’ latest proposal and declined to offer a counterproposal, with executive director Tony Clark saying in a statement, “it unfortunately appears that further dialogue with the league would be futile.” Clark then called on the league to set a schedule and inform players when and where they would be playing.

Both sides agreed that the March 26 pact allowed Manfred to unilaterally institute a shortened season — reportedly around 50 games — with players getting full prorated salaries. However, Manfred appeared to indicate Monday that he is not prepared to take that step barring movement from the MLBPA.

“I had been hopeful that once we got to common ground on the idea that we were gonna pay the players full prorated salary, that we would get some cooperation in terms of proceeding under the agreement that we negotiated with the MLBPA on March 26th,” Manfred said on ESPN. “Unfortunately, over the weekend, while Tony Clark was declaring his desire to get back to work, the union’s top lawyer was out telling reporters, players and eventually getting back to owners that as soon as we issued a schedule — as they requested — they intended to file a grievance claiming they were entitled to an additional billion dollars.

“Obviously, that sort of bad-faith tactic makes it extremely difficult to move forward in these circumstances.”