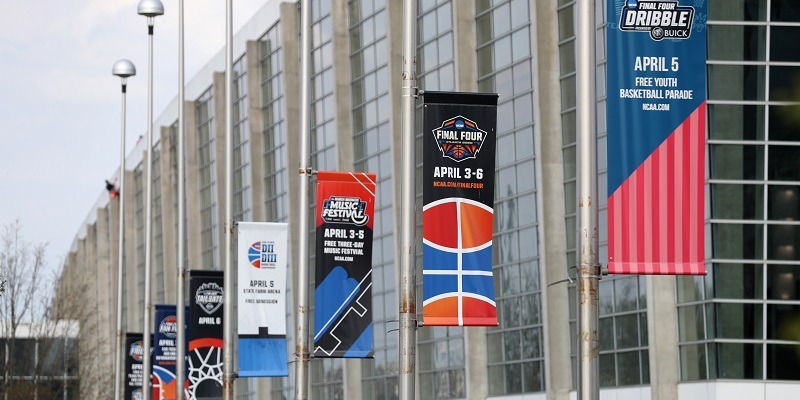 Down State Street, at Jack’s Oyster House, a city institution where countless political deals have been hammered out since 1913, there were no diners; the restaurant is shifting to carry-out only.

And around the corner on South Pearl Street, where teams should have been arriving to prepare for first- and second-round NCAA Tournament games at the Times Union Center beginning Thursday, only a few people milled about.

Welcome to what would have been NCAA Tournament weekend in Albany, called off when the coronavirus pandemic forced the cancellation of the tournament in the interest of player and public health.

The only signs that Albany was preparing to host tournament games were those hanging from the street poles.

Among the basketball community and fans in Albany and the greater Capital Region, the disappointment is apparent as they talk about their March sadness, not March Madness. While they said they understand the games couldn’t go on and that basketball had become inconsequential for the moment in the state — as of mid-day Wednesday, the state had nearly 2,400 confirmed coronavirus cases — many still wondered what might have been. ESPN’s mock bracket projection placed Villanova, Seton Hall, BYU, Penn State, Indiana, Hofstra and Eastern Washington in Albany, along with the winner of a No. 11 clash between North Carolina State and UCLA in the First Four.

“It’s unfortunate. I know everyone was excited for the opportunity but things like this unfortunately happened and have caused there to be no games,” said Joseph Girard III, an area native who just finished his freshman season at Syracuse. Girard, the all-time high school scoring leader in the state with 4,763 points, played his AAU ball for the prestigious Albany City Rocks.

“Hopefully there’s another time it can happen as this is a great basketball region and everyone would love to see it.”

Half of those cities have pro sports.

Albany is part of the other half.

With just under 100,000 residents, is by far the smallest city, and college basketball is king. The Albany Great Danes and Siena Saints might not make the tournament each year, but they’ve never pulled up stakes and left like the pro teams.

The Albany Empire won the 2019 Arena Football League title but didn’t have a chance to defend it when the league folded. The Albany Devils of the American Hockey League moved to west to Binghamton, N.Y., in 2017, ending the city’s 25-year affiliation with an AHL franchise. The Albany-Colonie Yankees, a team that once featured Hall of Famers Derek Jeter and Mariano Rivera, played their last season in 1994.

The Times Union Center, originally called Knickerbocker Arena and then Pepsi Arena, has hosted plenty of big events: men’s first- and second-round games in 1995; NCAA hockey’s Frozen Four in 2001; the NCAA wrestling championships in 2002; the 2003 men’s basketball East Regional, won by Carmelo Anthony and Syracuse on their way to the NCAA title; and the women’s East Regional in 2018 and 2019. It also was scheduled to host the NCAA men’s hockey East Regional next weekend.

But it took a significant effort from the Capital Region to get the NCAA to return the men’s tournament to Albany. The bid was boosted by a $78 million convention center that opened in 2017, a luxury hotel built in 2015 and nearly $20 million in renovations to the arena itself.

Wallet Hub, a consumer financial site, estimated the tournament would have represented a $2.8 million benefit to Albany.

And it would have inspired community pride and a new batch of young players in the region, which has had its share of home-grown stars appear in the NCAA Tournament. Pat Riley grew up in the city next door, Schenectady, and other locals to appear in the tournament through the years include Sam Perkins (North Carolina), James Thomas (Texas), Greg Koubek (Duke), Lionel Chalmers (Xavier), Jimmer Fredette (BYU) and Kevin Huerter (Maryland).

“I can speak from back when I was a kid and Villanova was in the tournament here” in 1995, said Carmen Maciariello, the head coach at his alma mater, Siena, which won the Metro Atlantic Athletic Conference title and was on its way to an NCAA Tournament bid. “I always had aspirations of playing DI basketball. The chance to see an open workout? … That was fascinating to me.”

“The connection Albany would have had with it … people were so excited about it and to have it disappear so quick,” said Dzikas, who coached Huerter in high school.

“It’s a major hurt for basketball people around here.”

So agreed Tom Huerter, Kevin’s father, who played at Siena. He was part of the No. 14-seeded Saints team that upset No. 3 Stanford, 80-78, in the first round of the tournament in 1989.

“Every year it is here the event sells out. Shows how strong of a basketball community we have in Upstate N.Y.,” he said. “We are not one of the largest markets but we support NCAA basketball.”

And he spoke about what the cancellation of the entire tournament means to basketball fans everywhere.

“I think it is incredibly sad,” he said Wednesday afternoon. “Tomorrow will be very tough. It should be one of the greatest days of the year and now it will be another day where we are secluded and separate from an event that means so much to so many. I think it will leave an incredible void in so many athletes’ lives that don’t get to finish their season or career. It will have lasting impact on so many and it so disappointing.”