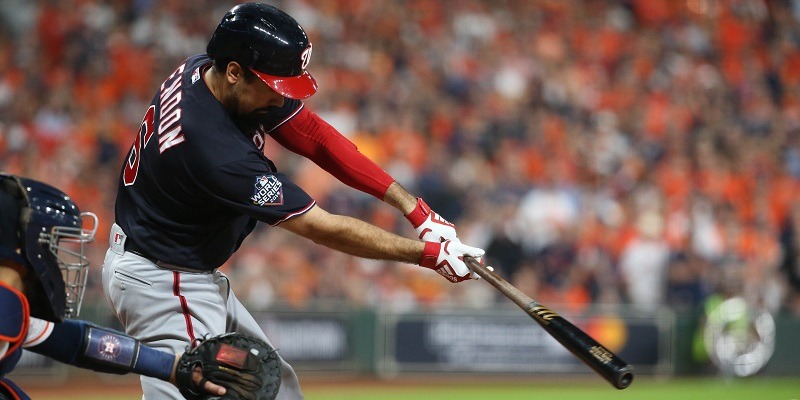 Not everybody associated with the Washington Nationals gets to spend a long time on the party train after the franchise’s first World Series title.

The offseason is here and it will be a busy one for general manager Mike Rizzo. Beating the Houston Astros in seven games was terrific fun, but now is when the big-time headaches begin.

The first big decision will occur by Saturday as World Series MVP Stephen Strasburg has 72 hours from the final out to decide whether to opt out of his current contract. Strasburg has four years and $100 million remaining on his deal.

Star third baseman Anthony Rendon, a National League MVP candidate, is an unrestricted free agent. He reportedly didn’t bite on a seven-year offer worth more than $200 million in September.

“There are certain milestones that come up throughout the offseason. We’ll start making decisions two days after the World Series,” Rizzo told The Sports Junkies, a Washington radio show, on Thursday. “We’ll be making our decisions. We’ve already thought about what our offseason plan list is going to look like. We’ve got some big decisions to make.”

The first involves Strasburg, who is coming off a postseason for the ages by going 5-0 with a 1.98 ERA and 47 strikeouts against four walks in 36 1/3 innings.

The 31-year-old has served the first three seasons of a seven-year, $175 million contract. Agent Scott Boras has been known to encourage his clients to strike when they have the leverage and Rizzo said he doesn’t know how things will play out.

“I’m not sure. We haven’t spoken at all about it,” Rizzo said regarding whether Strasburg will opt out. “We did not want to speak about it. I haven’t spoken to his agent about it. We’ll certainly be communicating diligently over the next couple of days, seeing what he’s going to do.”

Part of Strasburg’s decision may come down to things outside baseball.

He was a huge fan of his hometown San Diego Padres as a kid and hitting icon Tony Gwynn was his idol. He later played for Gwynn — who died in 2014 — at San Diego State en route to becoming the No. 1 overall pick of the Nationals in 2009.

With the Padres now close to being contenders, returning home for bushels of money could appeal to Strasburg.

Regardless, Rizzo is hoping the relationships Strasburg has with the Nationals will be a more important factor.

The situation involving Rendon is tough to forecast.

The 29-year-old just experienced a career year with a .319 average, 34 homers and 126 RBIs while on a one-year, $18.8 million deal. He also proved he could be the main cog in the offensive attack after Bryce Harper left as a free agent.

The Nationals won a “Bryceless Title,” but can they afford to lose another big stick in free agency for a second straight year?

Rendon may be looking for a deal on par with Colorado’s Nolan Arenado, who received an eight-year, $260 million last offseason.

Rizzo says finances won’t be a factor and that ownership always lets him make moves without interference.

“We have certainly had the resources to field a competitive team, (especially) since 2012,” Rizzo told the station. “I do not believe that that’s going to change. They’ve always given me the resources to put together a championship-caliber club, and I do not see that changing in the near future.”

The bullpen situation is one to watch with the club holding a $6.5 million option on left-hander Doolittle while right-hander Hudson was picked up off the scrap heap from the Toronto Blue Jays at the July 31 deadline. Hudson was the team’s main closer in the postseason and is set to become an unrestricted free agent.

Kendrick, who will become an unrestricted free agent, is 36 years old but was a major force in the postseason. He hit the decisive grand slam to beat the Los Angeles Dodgers in the NL Division Series and followed up by being NL Championship Series MVP during a sweep of the St. Louis Cardinals.

Cabrera also will be an unrestricted free agent after being a solid contributor.

Of course, no matter what moves occur in the offseason, Washington will have still have solid starting pitchers with Max Scherzer and Patrick Corbin, shortstop Trea Turner and 21-year-old left fielder Juan Soto to reshape the roster around as it attempts to defend its title.