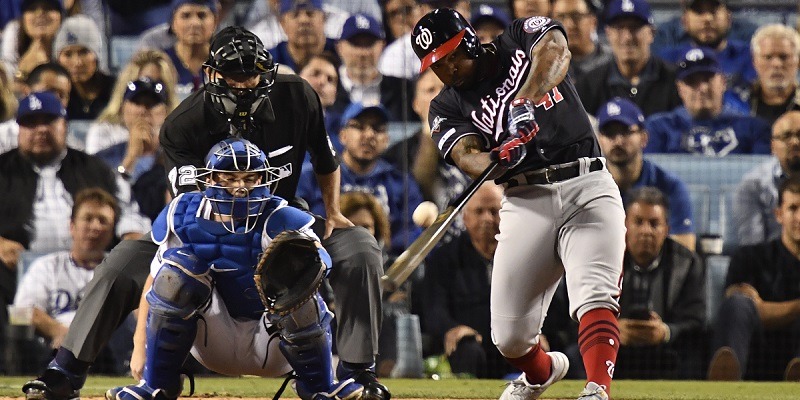 LOS ANGELES — Howie Kendrick hit a grand slam in the 10th inning on Wednesday, and the Washington Nationals pulled off an improbable comeback to earn a 7-3 victory over the Los Angeles Dodgers in Game 5 of the National League Division Series.

The Nationals advanced to their first NL Championship Series in five postseason appearances. The Montreal Expos reached the NLDS in 1981 well before their move to Washington for the start of the 2005 season.

The Nationals will open the NLCS on Friday at St. Louis, as the Cardinals won Game 5 of their NLDS 13-1 over the Atlanta Braves earlier Wednesday.

The Dodgers were six outs away from moving on after Walker Buehler pitched 6 2/3 innings of one-run ball and ace Clayton Kershaw got the last out in the seventh. But the Nationals tied the game 3-3 on back-to-back home runs from Anthony Rendon and Juan Soto in the eighth inning on consecutive Kershaw pitches.

Kendrick’s grand slam came off Dodgers right-hander Joe Kelly (0-1), who struggled to the tune of a 4.56 ERA in the regular season.

The Dodgers’ streak of three consecutive appearances in the NLCS came to an end. Los Angeles appeared in each of the last two World Series before posting a franchise-record 106 victories in the regular season this year.

Buehler, who allowed four hits and three walks while striking out seven, pitched well for the second time in a series that seemed to anoint him as the new No. 1 pitcher in the Los Angeles rotation. He won Game 1 when he gave up one hit over six scoreless innings.

Nationals starter Stephen Strasburg, who gave up just one run in a Game 2 victory, allowed three runs on six hits over six innings with one walk and seven strikeouts. He entered with just two earned runs allowed in his previous 28 playoff innings.

The Nationals broke through against Buehler in the sixth inning. Rendon led off with a double and scored on a single from Soto.