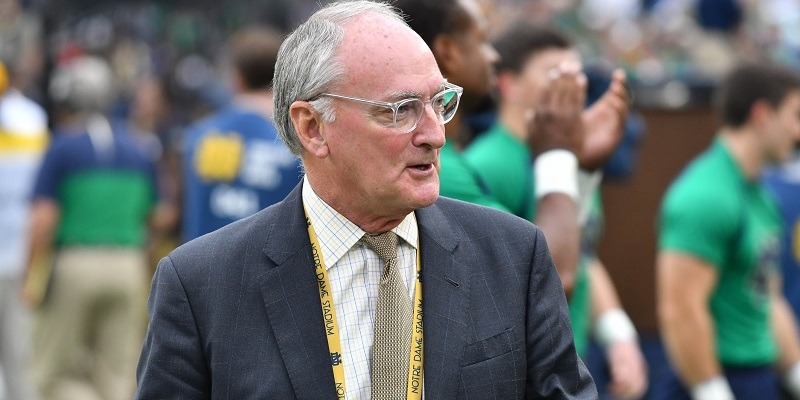 The fate of the season-opening game between Notre Dame and Navy, scheduled to be played Aug. 29 in Dublin, is uncertain after the Irish government announced Tuesday that it is banning all gatherings of 5,000-plus people until September.

The shutdown prompted by the coronavirus pandemic could cause a change in plans for the college football game.

Aviva Stadium, the planned site of the Irish-Midshipmen game, holds 51,700. The venue is regularly used for rugby and soccer games.

According to the Irish Times, while sporting events normally wouldn’t fall into the category of large events that need governmental licensing, such games likely will be canceled “in the coming weeks.”

Earlier this month, Fighting Irish coach Brian Kelly told NBC Sports that Notre Dame and Navy were exploring “all options” regarding the Dublin game, adding, “I can tell you this, those discussions are under way. They’re certainly being deliberated as we speak.”

The possibility of playing the game without fans wouldn’t appeal to Notre Dame athletic director Jack Swarbrick, who stated his opinion on closed-door games last week.

“I don’t see a model where we play, at least any extended number of games, in facilities where we don’t have fans,” Swarbrick told ESPN. “College football is about the cheerleaders and the band and the campus environment on game day. We’re interested in solutions that allow us to have a traditional game-day experience. …

“This is more about, we have to be consistent in our approach. I’m not sure how you say, ‘We’re OK with the students engaging on the field, but not fans in the stands.’

“Now, might there be approaches to fans in the stands that are a little different, that help ensure safety? Absolutely. But I can’t see playing in empty stadiums.”

Both Notre Dame and Navy are scheduled to have a week off after their Ireland trip before starting their stateside schedules. The Fighting Irish are due to play host to Arkansas on Sept. 12, the same day the Midshipmen are scheduled for a home game against Lafayette.