Lexie Hull leads No. 1 Stanford past No. 4 Maryland 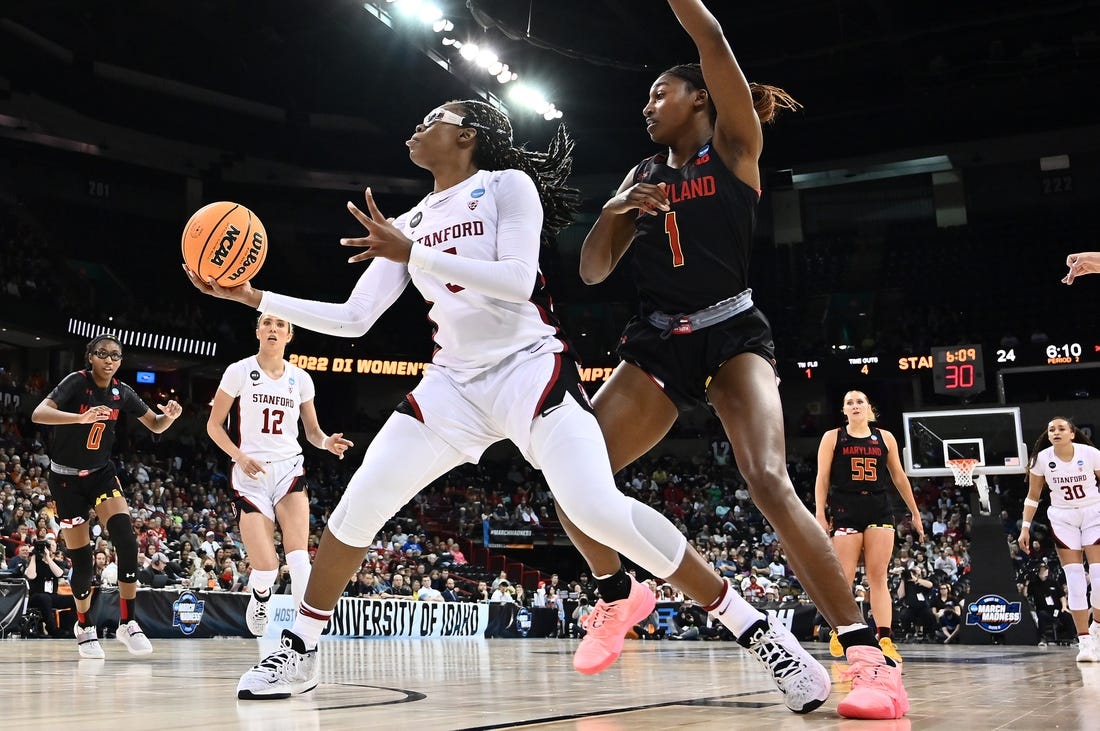 Top-seeded Stanford (31-3) advances to a matchup with second-seeded Texas (29-6) in the West Region final on Monday night. The Longhorns, who beat the Cardinal in November, advanced Friday with a 66-63 win over sixth-seeded Ohio State.

In losing to Stanford for the second time this year, fourth-seeded Maryland (23-9) got 25 points, nine rebounds and three blocks from Angel Reese. Diamond Miller added 11 points before fouling out.

Cold shooting doomed the Terrapins from the start. In the first quarter, they made just 3 of 16 shots from the floor on their way to shooting 33.8 percent for the night.

Meanwhile, the Cardinal made 10 of 14 shots in the first quarter and finished 45.6 percent from the floor. Stanford also owned a huge rebounding edge, 50-32.

Jones, who made just six 3-pointers in the regular season, hit two in the first three minutes as Stanford took a lead it would not relinquish.

Francesca Belibi and Brink made two buckets apiece as Stanford scored eight straight points to grab a 20-8 lead late in the first quarter.

Before the half was over, Hull scored on a backdoor layup and her twin sister, Lacie, added a 3-pointer to trigger a 9-0 run that stretched the Cardinal lead to 36-19.

Lexie Hull scored 10 of her points in the third quarter as Stanford gained its biggest lead of the night, 59-33.

Maryland answered with a 10-0 run that bridged the third and fourth quarters and then cut the deficit further late in the game. A 3-pointer at the final buzzer by Reese provided the final margin.

No. 1 Houston draws its first ranked opponent when No. 8 Alabama visits Saturday. The Cougars (9-0) are coming off a 76-42 win over visiting North Florida on Tuesday, while…

It might be early in the season, but it’s safe to say that both No. 4 Purdue and Nebraska have so far exceeded expectations bestowed upon them just as Big…

No. 17 Illinois looks to ride momentum against Penn State

Titans CB Caleb Farley (back) out for season