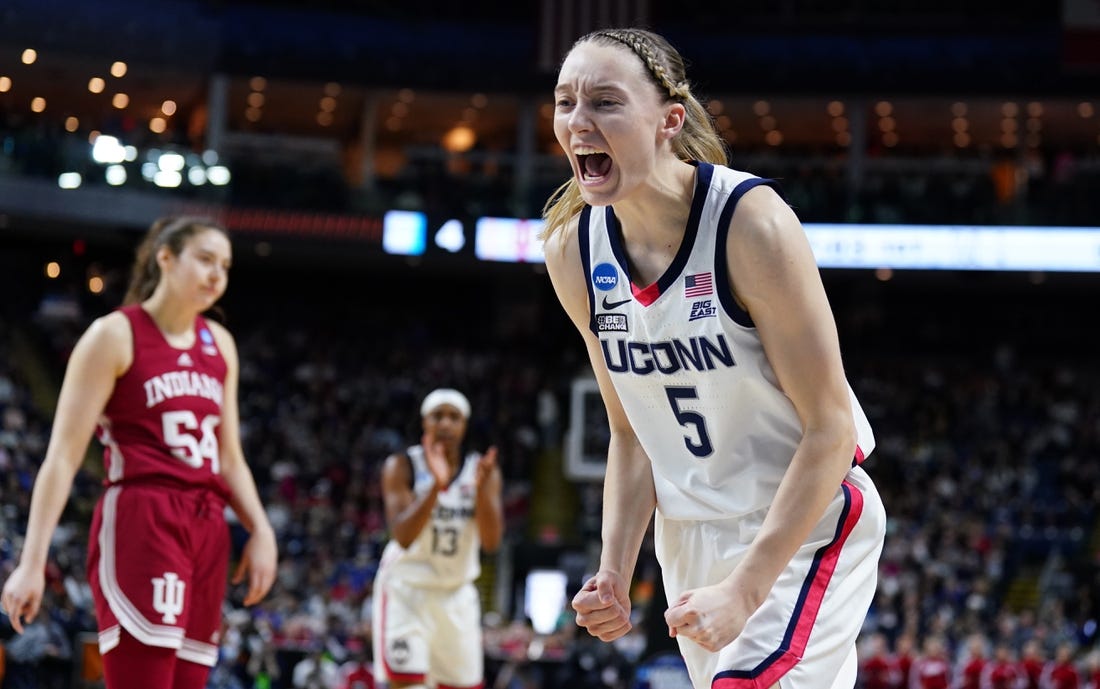 Paige Bueckers and Christyn Williams scored 15 points apiece to lift second-seeded UConn to a 75-58 win over third-seeded Indiana on Saturday in the Bridgeport Region of the women’s NCAA Tournament.

Azzi Fudd added 13 points and Olivia Nelson-Ododa collected 10 points and 14 rebounds for the Huskies, who outrebounded the Hoosiers by a 39-27 margin.

UConn (28-5) moves on to face top-seeded North Carolina State (32-3) in the Elite Eight on Monday. The top-seeded Wolfpack posted a 66-63 win over fifth-seed Notre Dame on Saturday.

Ali Patberg had 16 points, Grace Berger added 13 and Mackenzie Holmes had 12 for Indiana (24-9). The Hoosiers’ season ended with a Sweet 16 appearance after reaching the Elite Eight a season ago.

Leading 37-33 at halftime, UConn took control of the game with a 16-0 run to start the third quarter. Bueckers made a 3-pointer and two layups as the Huskies held the Hoosiers scoreless for 4:04.

Fudd scored nine points in the first half to pace UConn.

Indiana bolted out to an 8-2 lead following a jumper from Nicole Cardano-Hillary.

UConn regrouped with its physicality. A three-point play by Williams gave the Huskies their first lead at 19-18, and Nelson-Ododa followed with a layup.

UConn extended its lead to as many as nine points in the second quarter, going up 35-26 on a Fudd 3-pointer. But Indiana answered with a quick 4-0 run, with all four points coming from Holmes.

A layup from Aaliyah Edwards put the Huskies up 37-30, but Aleksa Gulbe sank a 3-pointer at the first half buzzer for Indiana.

UConn scored seven second-chance points off eight offensive rebounds in the first half.