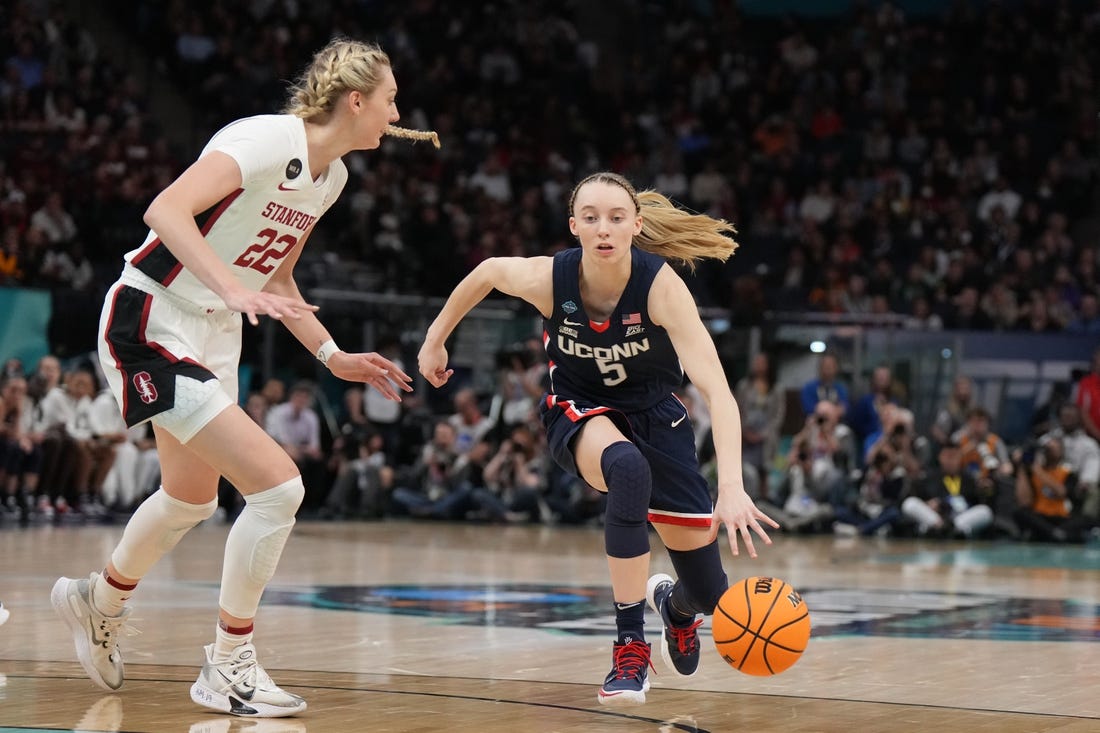 MINNEAPOLIS — Paige Bueckers celebrated her return home with a team-high 14 points to help UConn to a 63-58 victory over defending champion Stanford on Friday night in the semifinals of the women’s Final Four.

UConn (30-5), the only No. 2 seed in the Final Four, will face South Carolina (34-2) in the title game Sunday night at Target Center. The Gamecocks defeated Louisville 72-59 in Friday’s first semifinal in a matchup of No. 1 seeds.

UConn, in its 14th consecutive Final Four, will be bidding for its 12th national title, but first since the Huskies last reached the title game in 2016. South Carolina won the title in 2017.

Bueckers, the national player of the year as a freshman last season, missed the first 19 games of the current campaign following knee surgery. The former Minnesota high school standout, who played about 10 miles from Target Center, hit 7 of 13 shots and dished out five assists with four rebounds and two steals.

Ashten Prechtel’s 3-pointer brought Stanford within 58-54 and UConn turned it over on the ensuing possession. Haley Jones banked in a short jumper to make it 58-56 with 23 seconds left.

Freshman Azzi Fudd answered with two free throws to make it 60-56, although Cameron Brink scored underneath to cut the lead to 60-58 with 18 seconds remaining.

Christyn Williams hit two free throws to make it a two-possession game with 11 seconds left, and Stanford missed a desperation 3-point attempt on the other end.

“We said the other day, points are hard to come by in this tournament and today was certainly no different,” UConn coach Geno Auriemma said. “You’re going to have to win some other way than thinking you’re just going to come out here and it’s going to be nicey-nicey and they’re going to let you shoot whatever shot you want to shoot.”

“I thought I had good looks. I’m sure everybody on the team felt that way,” said Jones. “So, I mean, what are you going to do? The ball doesn’t always go in the basket. So, you’ve got to swallow that pill and learn to move on from it.”

Evina Westbrook had 12 points, and Williams pitched in 10 for UConn.

UConn opened the fourth quarter with an 8-2 run, going in front 47-39 on two free throws by Olivia Nelson-Ododa, as Brink picked up her third and fourth fouls in a 23-second span.

Aaliyah Edwards put UConn up 52-44, but Jones answered with a layin and two free throws to make it 52-48.

Stanford trailed 39-37 entering the fourth quarter after making just 4 of 16 shots in the third period, including a 1-for-11 stretch.

UConn took its biggest lead of the first half at 25-19, but the Cardinal answered with seven consecutive points.

“We did not play very well tonight,” Stanford coach Tara Ann VanDerveer said. “We really struggled running our offense. I think there were some self-inflicted wounds on what we were doing out there. It was disappointing. I thought our defense really worked hard.”

“All in all, we just came up short. We lost to a really good team. Connecticut played very well.”