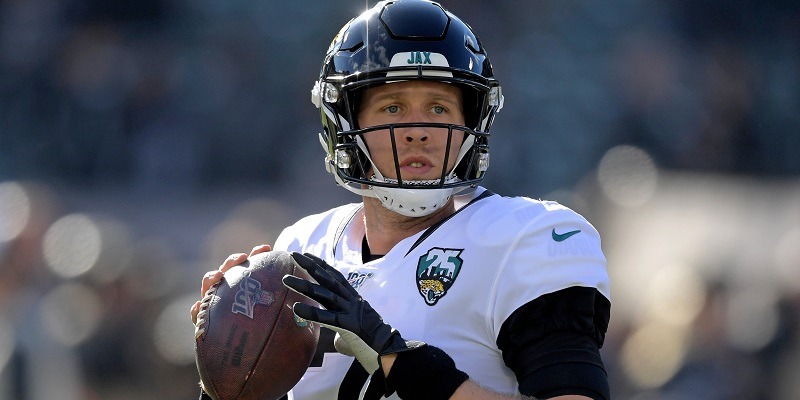 Quarterback Nick Foles said he returned to organized team activities with the Jacksonville Jaguars at his wife’s insistence.
Foles was away from the team for part of the week to be with his wife and daughter as the family mourned their recent miscarriage. Foles’ wife, Tori, posted a faith-filled message to Instagram explaining what the family was experiencing.
Tori Foles went into early labor at just 15 weeks on May 26.
“If my wife needed me at home right now, I’d be at home,” Foles said Friday. “That’s just me being honest. She’s the one who said, ‘Go, the team needs you right now.’ She knows I’m coming home right away. So that’s her. It really is as simple as that.”
Foles added that his wife’s mother was in town and that his mother was arriving soon.
Foles returned to the team facility Thursday morning, despite assurances from coach Doug Marrone that the Jaguars were planning to give him as much time as he needed with his family.
“The great thing is the team said as long as I need, whatever I need, they understand,” said Foles. “They’ve been wonderful. But at the same time, my wife also knows; she wants me to be here because we’re building something right here.”

Read below for full story. So thankful for this family right here and miss having them right down the street! Our weekend together was not quite as planned, but blessed by their presence and the help they provided us with an unexpected set of circumstances that nick and I suddenly found ourselves in. As several of you knew, we were about 15 weeks pregnant with our 2nd baby. Early Sunday morning after a rough couple days fighting a “virus” of some sort, I went into sudden labor and knew something was wrong. Not long after we learned we had miscarried our baby boy. To fully labor and deliver and even see our baby boy was a pretty devastating process. Come to find that I had contracted an infection of pneumonia in the blood. The emotions go back and forth from immense and overwhelming sadness, confusion and anger to a firm belief that God has this fully in his hands and will use this for good. We cannot always understand or explain, but we know that is true. We’ve endured some unique challenges as a couple so far, but never quite knew what something like this felt like and now we do. We have so much compassion and sensitivity to those who have gone through a miscarriage at any point and in any circumstance. We know they all happen very differently. We are finally home from the hospital and recovering physically from the infection with antibiotics (already much better) as well as emotionally from this traumatic loss. This will take time. So many thanks to everyone who has reached out to us and who has been praying for us. Also a heartfelt thank you to Baptist Beaches hospital staff in maternity. What an incredible team of doctors and nurses that took care of us the last 4 days. ❤️ Thank you Taylor family for being here this weekend. We had a pretty fun weekend planned, and it was turned upside down, but God knew we needed you. ❤️