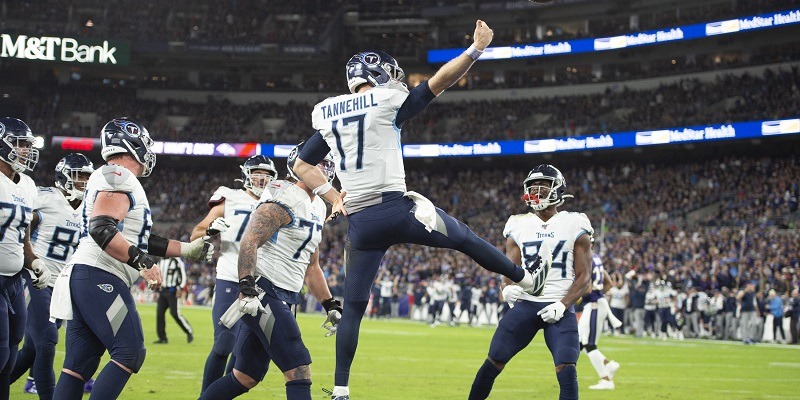 Signing Tannehill leaves the Titans free to use the franchise tag on running back Derrick Henry, should they not be able to come to contract terms with him before Monday afternoon’s deadline.

Just as Tannehill was, Henry is an unrestricted free agent.

NFL Network’s Ian Rapoport tweeted Friday that the Titans “plan to bring back Derrick Henry at a big number.”

Tannehill becomes the first domino to fall among free agent quarterbacks, and his signing eliminates the chance Tom Brady will sign with the Titans. The longtime New England Patriots star had been mentioned widely as a possible replacement for Tannehill on a team that many see as ready to compete for a Super Bowl ring.

The Titans signed Tannehill, a first-round draft pick by the Miami Dolphins in 2012, before the 2019 season to back up Marcus Mariota. When Mariota struggled, Tannehill stepped in, going 7-3 as a starter and leading the Titans to the playoffs as the sixth seed as his career was reborn. He was named Comeback Player of the Year in 2019.

Tennessee advanced to the AFC Championship Game, losing to the eventual Super Bowl champion Kansas City Chiefs. Still, at 31, Tannehill was named to his first Pro Bowl as he completed a career high 70.3 percent of his passes for 2,742 yards, throwing for 22 touchdowns and six interceptions.

Earlier this offseason, Tannehill told Titans Online he wanted to return to Tennessee.

“I do know I love the (Titans) organization, I love the team, I love the guys on the team, and I love the tone coach (Mike) Vrabel sets, and the vision that he has,” Tannehill said while at the Pro Bowl. “I feel like we’re headed in the right direction.

The Titans selected him in the second round of the 2016 NFL Draft, and he has gained 3,833 yards and scored 38 touchdowns in four seasons. He also was selected to his first Pro Bowl in 2019.