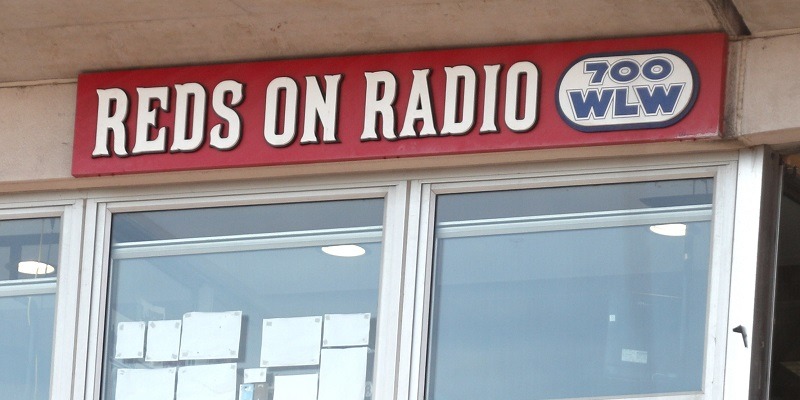 Cincinnati Reds broadcaster Thom Brennaman was yanked off the air Wednesday night after he made a homophobic slur.

The Reds later announced that they were suspending Brennaman from their broadcast team.

Brennaman apparently thought his microphone was off when he made the comment on Fox Sports Ohio. The Reds were playing the first game of a doubleheader in Kansas City, which he described as “one of the (expletive) capitals of the world” as a camera spanned the field before the top of the seventh inning.

The clip quickly went viral on social media. Brennaman remained on the broadcast for the remainder of Game 1 of the doubleheader and the start of Game 2, but he apologized in the top of the fifth inning of the second game before being replaced by Jim Day, who typically works as the broadcast team’s on-field reporter.

“I made a comment earlier tonight, that, I guess, went out over the air, that I am deeply ashamed of,” Brennaman said. “If I have hurt anyone out there, I can’t tell you how much I say from the bottom of my heart, I’m so very, very sorry. I pride myself and think of myself as a man of faith. …

“I can’t begin to tell you how deeply sorry I am. That is not who I am. It never has been. And I’d like to think maybe I could have some people who could back that up. I am very, very sorry, and I beg for your forgiveness.”

The Reds issued a statement late Wednesday night: “The Cincinnati Reds organization is devastated by the horrific, homophobic remark made this evening by broadcaster Thom Brennaman. He was pulled off the air, and effective immediately was suspended from doing Reds broadcasts. We will be addressing our broadcasting team in the coming days. In no way does this incident represent our players, coaches, organization, or our fans.

“We share our sincerest apologies to the LGBTQ+ community in Cincinnati, Kansas City, all across this country, and beyond. The Reds embrace a zero-tolerance policy for bias or discrimination of any kind, and we are truly sorry to anyone who has been offended.”

Fox Sports Ohio added in a statement, “The language that Thom Brennaman used this evening is hateful, offensive, and in no way reflects the values of Fox Sports Ohio. We agree with the Reds’ decision to suspend him until further notice.”

Brennaman, 56, talked to The Athletic before his suspension was announced, saying, “I don’t know where, at this point, that I could go besides just continuing to express my regret, and my sorrow for what I said. …

“I have never in my life, not for one second of my life, have I been homophobic, have I been racist, have I been any of those words that are terrible, terrible words. And I would stand next to any LGBT person in the world, and lock arm-in-arm with them that they have all the same rights as every other person born on God’s green earth.”

Reds manager David Bell, asked postgame if he knew anything about Brennaman’s comments, replied, “It just wouldn’t be right or fair of me to comment yet. Somebody mentioned it to me. I am not on social media. Obviously I was out for the game. I’m not trying to avoid it. I really (need) the opportunity to understand exactly what happened before I commented on it.”

Cincinnati reliever Amir Garrett tweeted, “To the LGBTQ community just know I am with you, and whoever is against you, is against me. I’m sorry for what was said today.”

To the LGBTQ community just know I am with you, and whoever is against you, is against me. I’m sorry for what was said today.

Matt Bowman, a Reds reliever who is on the team’s injured list, posted on his Twitter account, “LGBTQ+ community, as a member of the Reds organization, I am so sorry for the way you were marginalized tonight. There will always be a place for you in the baseball community and we are so happy to have you here.”

LGBTQ+ community, as a member of the Reds organization, I am so sorry for the way you were marginalized tonight. There will always be a place for you in the baseball community and we are so happy to have you here.

Brennaman is the son of longtime Reds broadcaster Marty Brennaman. The younger Brennaman also serves as an NFL broadcaster for Fox.