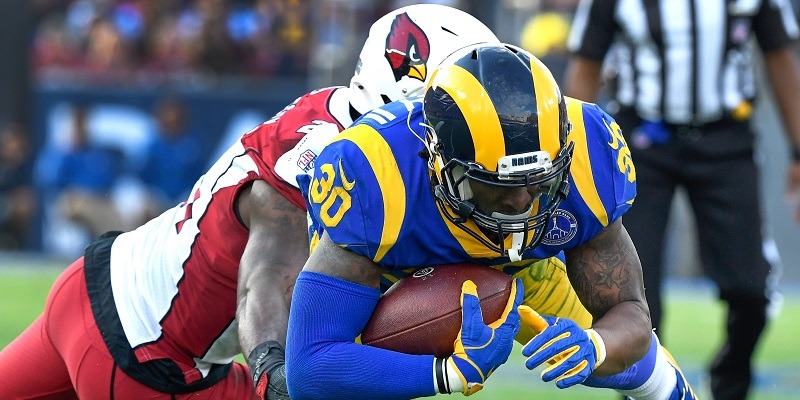 Todd Gurley was released by the Los Angeles Rams.

We have released Todd Gurley.

Gurley was officially let go on Thursday after what was reportedly an extensive effort to find a trade partner.

According to reports, the Atlanta Falcons, Tampa Bay Buccaneers, Buffalo Bills, San Diego Chargers, Miami Dolphins and Kansas City Chiefs could be among the teams interested in Gurley.

Gurley met with the Rams two weeks ago, according to reports, to determine his fate.

Trading Gurley would have created a $12.6 million salary-cap hit while saving the team $4.65 million overall.

At the 2020 NFL Scouting Combine, Rams general manager Les Snead indicated the franchise would be looking at existing contracts to find creative ways to work out an extension for cornerback Jalen Ramsey.

Snead didn’t directly make the Ramsey-Gurley connection. But the accounting is clear for a team with four players scheduled to count more than $15 million each against the 2020 salary cap. Quarterback Jared Goff checks in at a whopping $36 million.

Wide receiver Brandin Cooks, who has a cap hit of $16.8 million, is also on the trade block, according to reports.

The Rams said in February they were “working through” what a plan for Gurley could look like next season, coach Sean McVay said.

“You want to be consistent, but I think certain guys, just understanding the workload that their specific position entails or what is the best way to have a long-term solution for getting through the entire season,” McVay said. “We’ve been consistent with that with Todd Gurley from when I first got here.

“I think it was just something that was talked about more because he missed a couple games toward the latter half of the ’18 season, but those are things that you want to be able to be specific with each player while still being consistent in the big picture, and those are things that as we get closer to those dates, we’ll discuss a little bit more.”

The Rams already have paid a steep price for Ramsey. They landed the 25-year-old All-Pro cornerback in October via trade with the Jaguars. Jacksonville received two first-round picks and a 2021 fourth-round pick.

Snead said there is no hard timeline or deadline on the Ramsey negotiations. Further spreading Goff’s new deal and juggling bonus structures could create more than $15 million in cap space for next season.

“We’d definitely like to have Jalen helping the Rams for more than just the 2020 season,” Snead said.