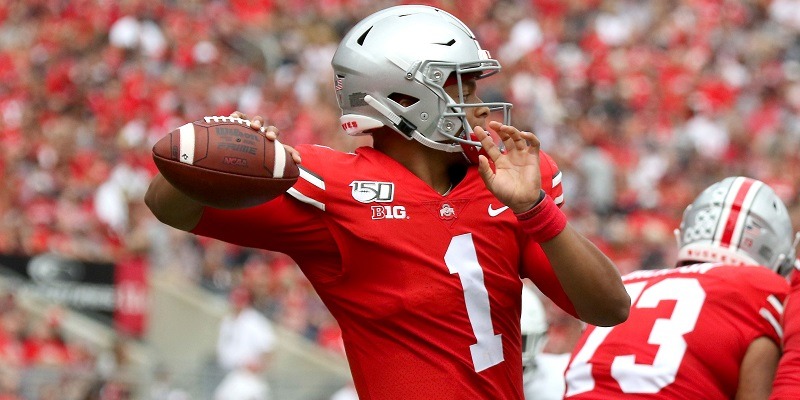 Georgia dual-threat quarterback Justin Fields is set to transfer to Ohio State and will request an eligibility waiver to play right away, according to multiple reports on Friday.
Fields was reportedly unhappy playing behind Bulldogs quarterback Jake Fromm, who will be a junior.
Fields has worked with the same QB guru, Sean Avery, who helped develop outgoing Ohio State QB Dwayne Haskins into a Heisman finalist this past season.
Haskins, who has since declared for the NFL draft, said in December that Fields has reached out to him about the Ohio State program and new coach Ryan Day.
If Fields is granted immediate eligibility, he figures to challenge backup Tate Martell for the starting job next season.
When rumors of Fields joining the Buckeyes surfaced before the Rose Bowl, Martell said he has no intention of transferring.
“Why would I leave for someone who hasn’t put a single second into this program yet?” Martell asked rhetorically. “I’ve put two years of working my ass off for something that I’ve been waiting for and dreaming of having my whole life.”
Martell was the No. 2 dual-threat quarterback in the Class of 2017, according to the 247Sports composite. He redshirted in 2017. The same service named Fields the No. 1 dual-threat QB in the Class of 2018.
Martell and Fields saw limited action in 2018.
Martell appeared in six games and completed 23 of 28 passes for 269 yards and a touchdown. On the ground, he carried the ball 22 times and gained 128 yards, scoring two TDs.
Georgia created plays for Fields, who appeared in 12 games. He was 27-of-39 passing for 328 yards and four touchdowns. He was Georgia’s fifth-leading rusher, with 266 yards on 42 carries and four TDs.
–Field Level Media