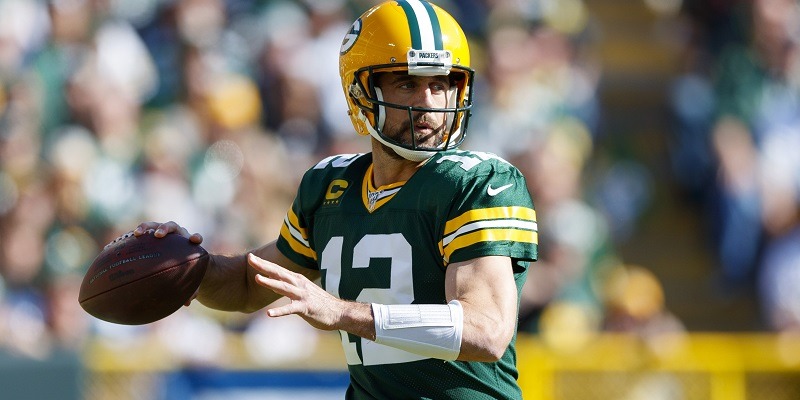 Aaron Rodgers threw five touchdown passes as the Green Bay Packers capped their fifth home game in seven weeks with a 42-24 dismantling of the Oakland Raiders on Sunday.

Green Bay improved to 6-1 under first-year coach Matt LaFleur behind the biggest game of the season from Rodgers. When he hit Marquez Valdes-Scantling for a 74-yard touchdown midway through the fourth quarter, Rodgers had six total touchdowns compared to six incompletions and a perfect 158.3 passer rating. He wound up completing 25 of 31 passes for 429 yards.

The Raiders (3-3), in the middle of a six-week stretch without a game in Oakland, were doomed a porous pass defense and miserable red-zone offense in losing after their bye.

The game swung late in the first half. With Green Bay having just taken a 14-10 lead, the Raiders motored into scoring position on a 48-yard catch by tight end Darren Waller to the 3. On second-and-goal at the 2, Raiders quarterback Derek Carr lunged head-first to the goal line with the ball extended. Before his knee hit the turf, Carr lost the ball, and it bounced out of the end zone, resulting in a turnover and touchback for the Packers.

Green Bay took advantage with a touchdown and potential 14-point swing on Rodgers’ 37-yard touchdown pass to Jake Kumerow with 12 seconds left in the half. Kumerow caught the ball at the 11 and somehow kept his balance along the sideline.

The Packers got the ball back to start the second half and wasted no time in adding to their lead. On the first play from scrimmage, Rodgers hit Valdes-Scantling for a gain of 59, setting up the quarterback’s 3-yard touchdown run that extended the lead to 28-10.

After the Raiders pulled with 28-17 on a 7-yard TD catch by Waller, Rodgers struck again. He started the drive with a 25-yard pass to tight end Jimmy Graham and capped it with a 3-yard touchdown pass to Graham.

The 74-yard scoring pass to Valdes-Scantling, on which the second-year receiver slipped a tackle by cornerback Gareon Conley and ran untouched the final 69 yards, gave Rodgers five touchdown passes for the first time since Sept. 28, 2015, against Kansas City.

Rookie running back Josh Jacobs (21 carries, 124 rushing yards) and Waller (seven receptions, 126 yards, two touchdowns) had huge days for the Raiders, who produced 484 total yards but went just 3 of 6 on scoring when reaching the red zone.