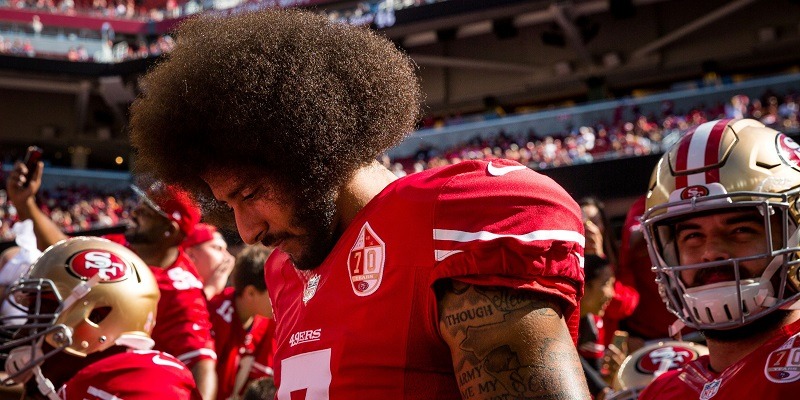 “I still don’t think they’ve gotten it right,” Jenkins said Tuesday in an appearance on “CBS This Morning.” “Until they apologize specifically to Colin Kaepernick, or sign him to a team, I don’t think that they will end up on the right side of history.

“At the end of the day, they’ve listened to their players, they’ve donated money, they’ve created an Inspire Change platform. They’ve tried to do things up unto this point. But it’s been one player in particular that they have ignored and have not acknowledged, and that’s Colin Kaepernick.”

“… That’s the only thing people want to hear. If it’s not going to correct that or acknowledge that, then everything else doesn’t need to be said.”

On Friday, commissioner Roger Goodell released a video saying, in part, “We, the National Football League, were wrong for not listening to NFL players earlier.” Goodell also encouraged all players to “speak out and peacefully protest.”

That came in response to a video with more than a dozen star players — including reigning Super Bowl MVP Patrick Mahomes and Pro Bowlers Saquon Barkley and Deshaun Watson — asking the league to admit it was wrong for “silencing our players from peacefully protesting.” That video was reportedly produced with the help of a rogue NFL employee, who worked with New Orleans Saints wideout Michael Thomas.

Speaking Tuesday at George Floyd’s funeral in Houston, Rev. Al Sharpton said an apology from the NFL to Kaepernick would not be enough.

“The head of the NFL said, ‘Yeah, maybe we was wrong. Football players, maybe they did have the right to peacefully protest,’” Sharpton said. “Well, don’t apologize. Give Colin Kaepernick a job back. Don’t come with some empty apology. …

“You sorry? Then repay the damage you did to the career you stood down, ’cause when Colin took a knee, he took it for the families in this building. And we don’t want an apology. We want him repaired.”

Floyd, a black man, died May 25 in Minneapolis after a white police officer knelt on his neck for nearly nine minutes. His death has spurred global protests against police brutality and racial injustice, which Kaepernick protested by kneeling during the national anthem beginning in August of 2016.

Kaepernick, 32, has not played since the end of the 2016 season, and he eventually settled a collusion case with the NFL last spring. Last fall, Kaepernick took part in a workout that was organized in part by the league, but the sides disagreed on several aspects of the workout, leading to a late change of location and lower attendance by scouts.

Asked about Kaepernick during a video conference with reporters Tuesday, Atlanta Falcons quarterback Matt Ryan said the free agent “should have every opportunity” to be back in the league.

“He created awareness for a situation that, it’s taking some time, but people are becoming more active in terms of their response to it,” Ryan said. “So I think from that standpoint, his protest is being heard at this point. It might have taken too long, but I think he should have every opportunity to have a job and to have a spot in this league.”

In a piece published by TIME on Tuesday, Denver Broncos linebacker Von Miller referenced Goodell’s statement, saying the stance is “great” as long as owners follow through.

“While it’s great that the NFL made an official statement in support of Black Lives Matter and the right to peaceful protest, it will ultimately be up to the team owners to put league policy into action and walk the walk,” Miller wrote.