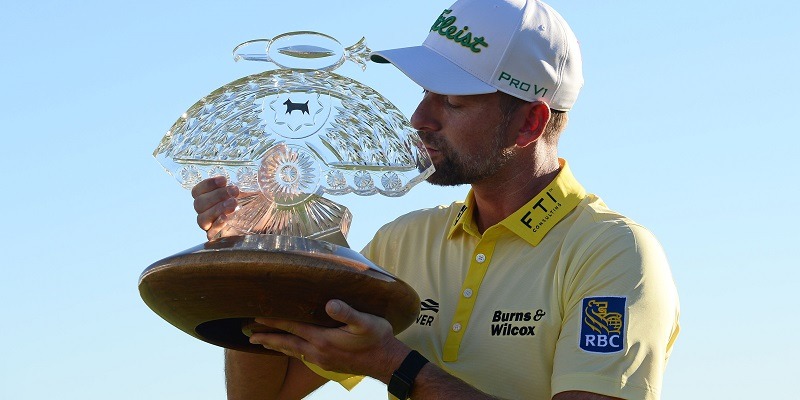 Webb Simpson closed with three straight birdies, including two straight on the18th hole, to snatch the Waste Management Phoenix Open from Tony Finau in a playoff Sunday in Scottsdale, Ariz., denying Finau what would have been his first win at a full-field PGA Tour event.

Finau, who entered the day one stroke ahead of Simpson at TPC Scottsdale, held a two-stroke lead with two holes to play. But while Finau parred Nos. 17 & 18, Simpson birdied both to finish the round with a 2-under par 69 and, more importantly, a 17-under 267 for the tournament, tied with Finau through 72 holes.

The pair went back to the 18th tee to start the playoff, and Finau immediately dug himself a hole when he drove into a bunker. Simpson followed with a drive that caught nothing but the fairway. From there, both players made it to the green on their approach, but after Finau sent his birdie putt left of the hole, Simpson drilled his 10-footer to win the tournament.

Only minutes earlier, a similar scenario played out on 18, when Simpson made his 17-foot birdie putt to force Finau into a must-make situation to win the tournament. But on that one, Finau didn’t put enough of his 8-foot putt and watched the ball slide across in front of the hole, settling for par and the playoff.

“To come down to the last couple holes and then birdie 18 twice in a row feels great,” Simpson told CBS after walking off the 18th green.

It is the sixth career win and first this season for Simpson. It also helps atone for his playoff loss to Hideki Matsuyama in this same event three years ago.

Finau was looking for his second career Tour win, and first since the 2016 Puerto Rico Open, an alternate event.

He began the day with seven straight pars and pars on 10 of his first 11 holes — a bogey on the par-4 eighth his only blemish. Simpson birdied the par-4 No. 5 then gave it back with a bogey on the par-3 seventh. He birdied No. 10 to move a stroke ahead of Finau, but then saw Finau birdie Nos. 12 and 13.

A bogey by Simpson on the par-5 15th dropped him two strokes behind Finau, setting up Simpson’s late-round heroics.

Justin Thomas was among a trio of golfers to finish three strokes back at 14 under to finish tied for third. Thomas had the day’s low round with a 6-under 65. Bubba Watson (66) and Nate Lashley (68) also finished at 14 under.

Max Homa (68) and Scott Piercy (71) were another stroke back, followed by Adam Long (72) at 12 under and seven golfers another stroke back. Among them was Spain’s Jon Rahm, who would have climbed to No. 1 in the Official World Golf Rankings with a win.

Defending champion Rickie Fowler shot his second straight 69 to finish the tournament at 7-under par, tied for 37th.